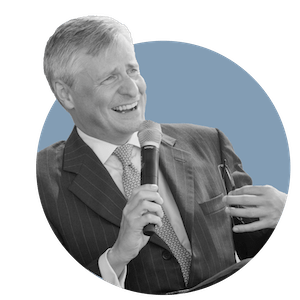 How did the United States arrive at the present moment? To answer this question, Jon Meacham quoted two statistics: Only 17 percent of Americans trust the government (down from 77 percent in 1955), and average household income is $58,000, some $70,000 less than what a family of four needs for a middle-class life. “These numbers have created uncertainty and anxiety and led to the ebb and flow of perennial forces, such as xenophobia, racism, nativism and isolationism, that are always with us,” Meacham said. “Leaders are far more often mirrors of who we are rather than makers of who we are, and that’s an uncomfortable reality.”

To overcome these forces, Meacham says, we must recover the true original intent of America’s founders. “For all of our problems, appetites, ambitions, fallen nature and frailty, reason has to take a stand against passion in the public arena. It’s about openness to changing circumstances and data. If you can’t recognize that circumstances have shifted and a preexisting opinion is worth revising, you can’t be an heir of 1776. Woodrow Wilson said the Constitution was supposed to be Newtonian, but was in fact Darwinian. Its genius was to change and evolve. If we can’t change and evolve as citizens and leaders, then we are undoing the American Revolution. The road to totalitarianism lies in unquestioning certitude.” Meacham identified three key characteristics of the American Revolution: curiosity, humility and empathy.

“If we’re not curious about the great forces shaping the world, we fall apart,” Meacham said. He described the American Revolution as the most important shift in Western thought since Constantine converted to Christianity: recognizing that we were born with the capacity and reason to determine our own destinies. “This shift found its fullest expression in what became the most important sentence in the English language: ‘We hold these Truths to be self-evident, that all Men are created equal, that they are endowed by their Creator with certain unalienable Rights, that among these are Life, Liberty, and the Pursuit of Happiness.’ I think that sentence has changed more lives around the world than any other. The eras we commemorate and want to emulate are the ones when we’ve more generously applied the implications of that sentence. We don’t build monuments to people who close doors, we build them to people who open doors. The fact that this sounds partisan is a sign of toxicity in the public square. It’s not a partisan statement, it’s just true.

“If we are curious about how previous eras got it right and got it wrong, I think we raise the chances of getting it right. The Constitution is fundamentally a Calvinistic document— it’s theological and assumes our sinfulness and that we will do the wrong thing far more often than the right thing. We have done everything since then to prove them right.”

Humility requires us to admit our mistakes and attempt to learn from them. President John F. Kennedy admitted that he made a mistake with the disastrous Bay of Pigs invasion and asked former President Dwight D. Eisenhower for help. Eisenhower told him to make important decisions with all his advisers in the room. Kennedy remembered this during the Cuban missile crisis. “We came through that not least because JFK had the guts to ask for help,” Meacham said. “If he could do that at the pinnacle of power, why are so many of us so inflexibly disposed on much less significant questions? Mainly because it’s easier to take on a certain set of facts and a certain view and stick with it.”

The greatest leaders have changed their minds: Lincoln about emancipation, FDR about intervention, JFK about nuclear war, and Reagan about the Soviet Union. “The presidents we remember warmly surprised us. Truman and Johnson ended up being much more broadminded than we expected. Johnson said something immensely important: What is the presidency for if not to do the big things that other people might not? Partisanship is fine, that’s the price of a free government. We are going to disagree. But is that partisanship reflexive or can it be reflective? We have to listen and admit occasionally that the other side has a point—that is America at its best.”

The third quality is empathy, which includes both acts of mercy and of self-interest. “The Golden Rule is a covenant, not a one-way street: do unto others as you want them to do unto you,” he said. “Being empathetic to one another involves a certain amount of republican self-interest. That’s how Madison built the Constitution, and it

begins to fall apart without an empathetic understanding of each other.” Meacham described how President George H.W. Bush barely talked about the fall of the Berlin Wall and refused to fly to Berlin. He was thinking about Mikhali Gorbachev, who dealt with a hard-core right wing that included Vladimir Putin. “We had a president who believed that the national interest was more important than his self-interest,” Meacham said.

Meacham threw in one more quality: candor, or openness about the scope and cost of great enterprises. “Presidents get in trouble when they try to get something by us. Give it to us straight. People can face any misfortune with fortitude as long as they believe the people in charge are not deceiving them or dwelling in a fool’s paradise. Tell us the worst and we’re there. Sell us something that ends up being more complicated, and it undermines confidence in everything else they said. Tell the truth; it’s easier to remember.”

Jon Meacham is a Pulitzer Prize-winner, contributing writer to The New York Times Book Review and contributing editor at Time magazine. He most recently published “The Soul of America: The Battle for Our Better Angels” and spoke at Westmont’s 2019 Lead Where You Stand leadership conference. This article is adapted from his presentation.