Daniel Kahneman, the self-described godfather of behavioral economics, discussed his research about the mind, intuition and reason at a November 2 Mosher Center for Moral and Ethical Leadership luncheon in Westmont’s Global Leadership Center. A Nobel Prize winner in economics and recipient of the Presidential Medal of Freedom, Kahneman wrote the bestselling book “Thinking, Fast and Slow.” President Gayle D. Beebe presented Kahneman with the first Westmont Global Laureate award to honor and recognize his seminal work in behavioral economics and contribution to human flourishing throughout the world. 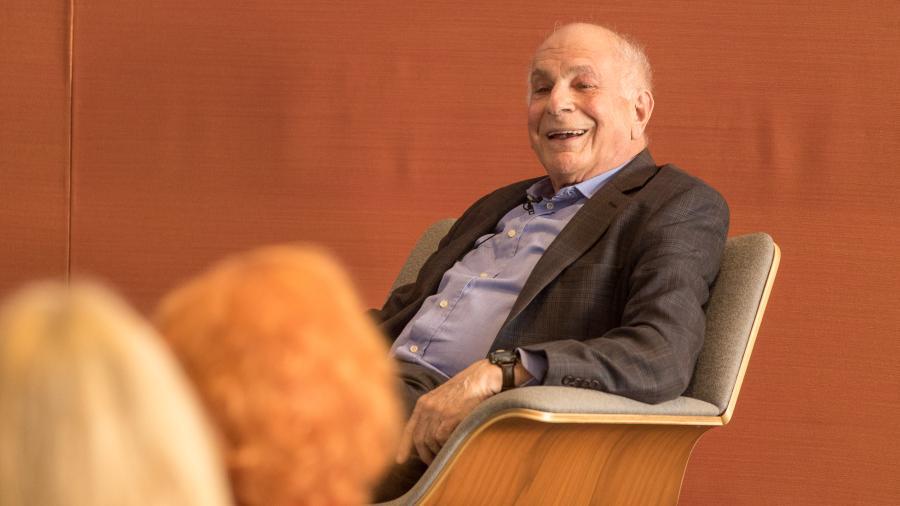 Kahneman spent six years working with Gary Klein, a pioneer in the field of naturalistic decision-making, probing the trustworthiness of intuition. “Intuition is knowing without knowing how you know,” Kahneman said. “It often comes with a sense of great confidence. Unfortunately, many intuitions or things that feel exactly like intuitions are not worth anything. And we can be totally wrong with the same sense of knowing and the same sense of confidence that we have when we do know what we’re talking about. Sometimes we get intuitions that are useless and sometimes we get intuitions that are marvelous.”

His research shows three conditions that need to be present for valid intuitive expertise: structure, practice and feedback.

In explaining structure, Kahneman said there should be a statistical regularity that we can pick up on. “The stock market is mostly irregular and so people who have strong intuitions about the stock market are self-deluding,” he said. “The financial world is not regular enough to sustain valid intuition.” 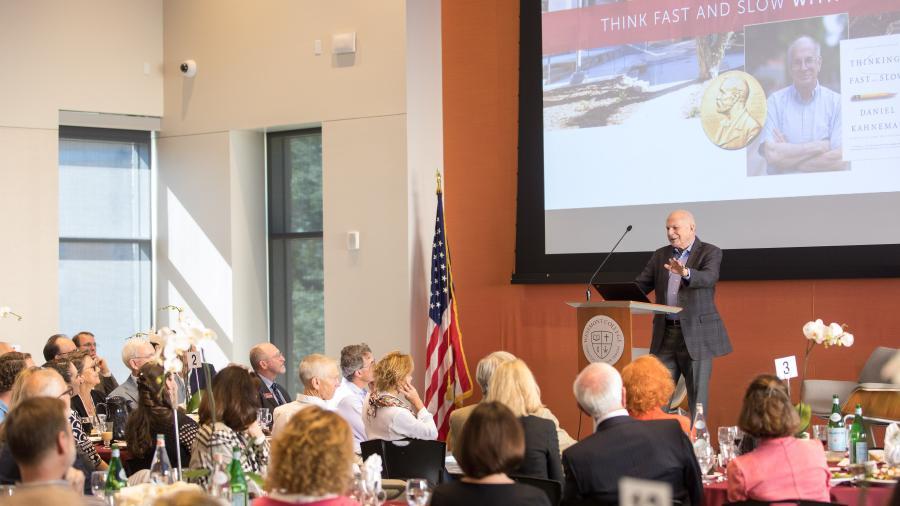 Kahneman also examined why people don’t change their minds and are unable to change anyone else’s mind on things that really matter. “This is a mystery in a way because of the way we feel about ourselves: That we’re reasonable people,” he said. “And if you ask me why I hold a belief, whether political or otherwise, I am going to give you reasons. And reasons come immediately to my mind as soon as you ask me a question. Because they are able to find the reasons for anything they believe, they are also inclined to believe that their beliefs are caused by their reasons that they have. In fact, that is not at all the case. The truth is virtually the opposite. We believe in reasons because we believe in the conclusions. Arguments presented to us won’t change our positions. In fact, they are useless.”

He went on to explain the role associative coherence plays when we align with people we love and beliefs we hold. “Because reasons play a very little role in determining our beliefs, they cannot be changed by reasons,” he said. “So the arguments that they give to us to change our positions, we can’t accept them. This is bad news. We want a world in which people hold positions because of the reasons that come to their mind. But we won’t reach that conclusion.”

Kahneman, who’s made profound impacts in many fields, including economics, medicine and politics, explored how to grade exams and conduct hiring interviews.

His research shows that when grading two essay questions from each student, it’s important to evaluate each question independently, without knowing who took the test. “Otherwise you form an impression very quickly and assimilate all the information that comes afterwards through that first impression,” he said. “It makes us happy to do this, it tells us our world is consistent and coherent.”