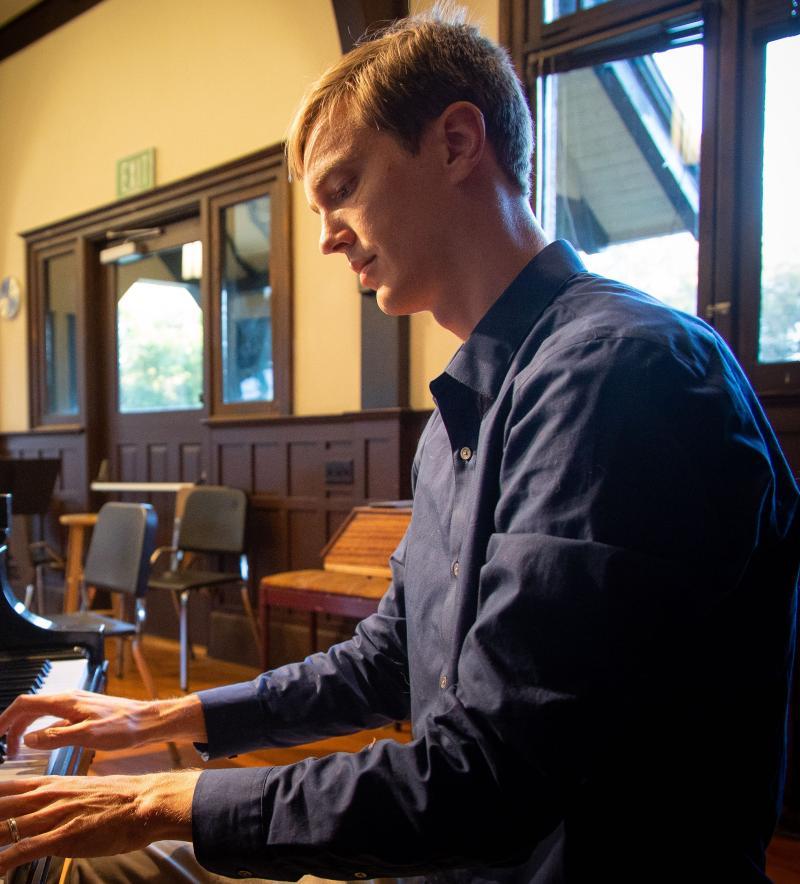 Watch chapel services at Westmont and Eben Drost ’11 will become a familiar presence. He plays the piano, leads worship, speaks the benediction and signals to students to take their seats—when chapel meets in the gym. The director of music and worship, Eben has shared his gifts with the Westmont community for the past three years. He leads the worship team both musically and spiritually and has increased the diversity of chapel worship songs. His statement on the worship team website explains his approach: “My desire is to encourage a culture of worship that is faithful to Christ, in harmony with Westmont’s mission and values, theologically rich, multicultural and artistically creative.”

Growing up in Redlands,California, Eben studiepiano and counted Beethoven as his hero. In high school, he formed a jazz combo known as Eben Flow. Throughout his younger years, he played keyboard and guitar in various bands. Eben found out about Westmont when his brother, Avery ’07, enrolled. When he visited campus, Eben says Westmont just felt right. “It seems like God decided I would attend Westmont before I ever did,” he says. “I’m eternally grateful for that.” He majored in music and performed with the worship team. “Majoring in music was a natural decision. I love music, and creative folks have typically been my people.”

Eben arrived at Westmont as a Christian, but he says his faith was “reconstituted” during his college years. One of the most important lessons he learned at Westmont was humility. “I started to realize that some major things in life—such as health—were not entirely in my control. I had to learn how to ask for help and be more vulnerable. Above all, God used my Westmont experience to open my eyes to the preeminence of Christ in the world and my life. I also gained a host of musical skills and intellectual sensibilities that have helped me do my current job. I learned so much about ministry from Joel Patterson, who led the worship team when I was on it.”

His favorite Westmont memory is meeting his wife, Megann Pratt ’13. She runs a business called The Atomic Hound, creating dog products and accessories, often for service dogs. She uses her business and influence to support people with disabilities. Eben and Megann married in 2013 and live in Carpinteria with their golden retriever, Ollie.

Before returning to Westmont to work, Eben served as an organist and choir accompanist at Trinity Lutheran Church and as worship director at Shoreline Community Church, both in Santa Barbara. He then led worship at Missio Community Church in Pasadena. He played keyboard for the Urbana 18 Worship Team, which led more than 11,000 college students in worship, and served as the band’s music director.

Eben earned a Masters of Arts in theology from Fuller Seminary in 2018, expanding and enriching his theology of worship. He also worked on the worship team there. “After Westmont, I had to learn how to wait on the Lord’s timing,” he says. “Health challenges made a lot of dreams and plans take longer to reach, but God was indeed at work in the waiting.”

Eben enjoys his job at Westmont. “Among my favorite things is the feeling I get after a really edifying chapel that God’s hand was clearly on it,” he says. He relishes working with students and fondly recalls traveling to the Calvin Worship Symposium in Grand Rapids with a few students. He still drinks out of the “Calvin Dad” mug they gave him. “I also absolutely love Orientation Week with the worship team at the beginning of the year,” he says.

In addition to his work with chapel, Eben directs the Westmont Jazz Ensemble. “I love helping people understand and appreciate the genre, both from a musical and historical perspective,” he says. “And, of course, when the groove is really locked in during a solo, that’s musical bliss.”

Eben hopes to continue developing worship leaders and creating music for the church. “I love using music and liturgy to tell the story of God and helping people see themselves as characters in that story,” he says. “It’s such a joy and honor to be used by God as he sanctifies his people for his glory.”