Westmont Magazine Learning from Past Presidents

Peggy Noonan’s quick, humorous wit and gracious reflections on encounters with world leaders kept an early-morning crowd engaged and appreciative. The 2019 President’s Breakfast speaker told the sold-out audience that working for Ronald Reagan and George H.W. Bush changed her life for the better. Noonan, a Pulitzer Prize-winning columnist for the Wall Street Journal and former presidential speechwriter, identified important lessons each of the last six U.S. presidents could have learned from his predecessor.

Describing Reagan as “the last great gentleman of American politics,” she lamented that his “old-school courtesy” no longer characterizes political leaders and media stars. A master of political and public intimacy, Reagan knew how to engage an audience and wore his heart on his sleeve. But in his personal life, he was more detached and distant, preferring private pursuits.

Bush mastered personal intimacy and relished relationships with his family and friends. But in the political realm, “some tentative part of his nature took hold,” she said. The day the Berlin Wall fell, he only made a public statement after his advisers urged him to call in the press. He didn’t want to further humiliate Soviet leaders as their system collapsed.

“Bush’s imagination failed him,” Noonan said. “Reagan would have spoken about the meaning, the historical—even existential—meaning of the event. He would have talked about what we learned and the new reality. He would have thanked all the heroes who helped this outcome reach its fruition—and he would have done it in a way that didn’t rub it in but that celebrated and credited the great turn in Russia by Russians.”

Bush could have learned a greater vision of the larger arc of history from Reagan. “See it, name it, define it, move on,” she said. “A great political leader has more in common with an artist than an economist. Artists see the sweep of things. They have a sense of what is essential and must be seen and stated. An economist can afford to be more narrowly focused, drill deeper but more narrowly.”

Noonan described President Bill Clinton as a riveting character who made a greater visual impression than a verbal one. He had grown up with Republicans and Conservatives and understood them and had some affection and respect for them. “But Clinton was too clever by half,” she said. Noonan thought he could have learned the “integrity and probity of the old political class” from the elder Bush. “A little rectitude goes far,” she said.

Unlike Clinton, President George W. Bush was often at a loss for words. But he made good decisions and stuck to them. He worked hard, but he tried to do too much, tackling big issues such as Social Security and immigration. “Bush took on more than one person could handle,” Noonan said. “He failed to learn modesty of ambition and to think small. He could have learned this from Clinton, who played a lot of small ball.”

President Barack Obama modeled parenthood to a generation whose own parents were focusing much of their attention on their phones. Noonan praised him as a good husband who respected his wife and a doting father who ate dinner with his family every night, an unusual occurrence in Washington, D.C. “But Obama didn’t show much sign of liking the other side,” she said. “He didn’t understand Republicans and Conservatives. He could have learned from George W. Bush, who showed warmth and respect for the other team. That could have helped Obama with his big, messy healthcare plan.”

Noonan won the Pulitzer Prize for her coverage of the 2016 presidential election and said she has traveled more extensively since Donald Trump declared his candidacy in the summer of 2015. “I’m always trying to understand that election,” she said.

After reading several of her nine books, three students, Sam Szpor ’19, Lucas Vieira ’19 and Megan Whitney ’21, asked Noonan questions during Convocation on campus after the breakfast. In response, she told engaging stories about writing President Reagan’s speech the day the Challenger exploded and the life of Pope John Paul II. 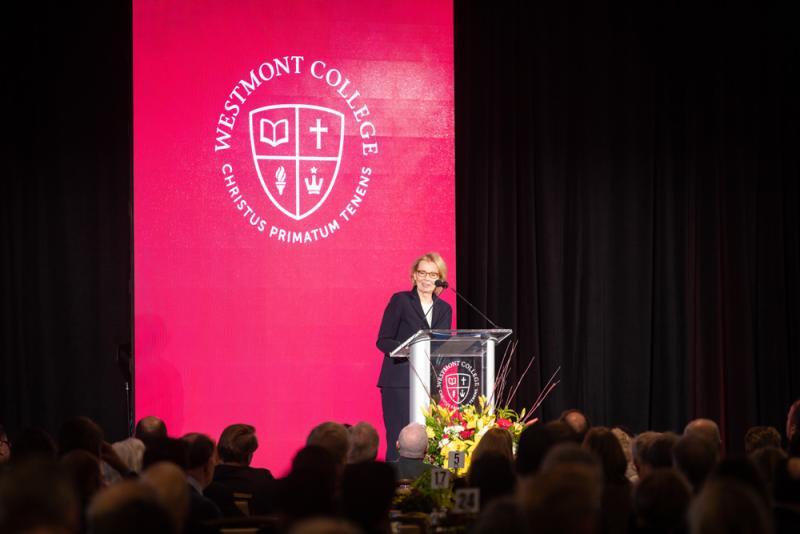 A young speechwriter in the White House, she realized immediately that the president needed to speak to the country the day of the space shuttle disaster even though he was scheduled to deliver his second State of the Union address that night—which he postponed. Noonan used notes about Reagan’s reaction when he first heard the news to craft the talk and ended with quotes from the inspiring poem “High Flight” written by John G. Magee in 1941: “We will never forget them, nor the last time we saw them, this morning, as they prepared for their journey and waved goodbye and ‘slipped the surly bonds of earth’ to ‘touch the face of God.’” Noonan kept in mind a variety of audiences, seeking to affirm the value of space travel and put the incident in context for world leaders, Americans, and schoolchildren and their parents, who had watched Christa McAullife, the first teacher in space, board the shuttle. The address drew widespread praise and ranks as one of the greatest American speeches ever.

Noonan also talked about John Paul II meeting with and forgiving the man who shot him, which she called a “great moment of the 20th century.” The Polish pope returned to his homeland during the Cold War and spoke to the largest crowd in European history in Warsaw in 1979. “The Polish trade union movement started with John Paul,” she said.

Westmont holds the President’s Breakfast every year in February or March. The event always sells out, and ticket sales begin about a month before the event at westmont. edu/breakfast.