Powell served as chairman of the Joint Chiefs of Staff for four years for both President George H.W. Bush and President Bill Clinton. After retiring as secretary of state for President George W. Bush for four years, Powell has traveled around the country. “By getting out of Washington and speaking, I’ve learned so much about what we can be,” he says. “I still see people who believe that together, as a community, we can make this a better place. We always have. America has a remarkable, resilient ability to always come out on top of its problems.”

Powell described President Reagan as a remarkable man who taught him much about leadership. He told a story from his most recent book, “It Worked for Me: Lessons in Leadership and Life,” in which President Reagan ignores Powell, who is briefing the president about an internal government conflict. “Colin, look!” the president replied. “The squirrels just came and got the nuts I put in the Rose Garden this morning.”

“Then it struck me, and it was something that I knew all along, but he crystallized it for me,” Powell says. “He was saying, ‘Colin, I love you and I will sit here as long as you want me to, letting you tell me your problems. You let me know when I have a problem, and then I won’t be looking at the squirrels in the Rose Garden.’”

From Reagan, Powell learned to get the best people around him and to empower them to get the job done. “Have a zone of indifference,” he said. “I always get every one of my subordinates knowing what they can do in the zone before coming to me. And when it is my problem, then you come to me. Until then, ‘Go guys, you’re empowered. I trust you. Go get it done.’ That’s what Reagan was saying, and it worked for him, except on those few occasions when he didn’t have the right people in place.”

Powell recalled a 1988 meeting with President Reagan about the Japanese buying Rockefeller Center, Pebble Beach Golf Course and other U.S. properties. “The cabinet is going nuts and saying, ‘We have got to see the president, something has to be done,’” Powell says. “They marched into the Oval Office, and they started beating up the president about the Japanese buying everything. The president is really focused; he’s not looking at the squirrels or anything. When they were all through, Reagan says ‘Well, you know, I’m glad they think America is a good investment. And that was the end of the conversation.” 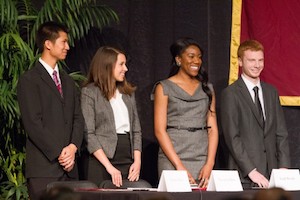 Speaking the day that sequestration took effect, Powell referred to the budget cuts as evidence of a seriously damaged system. “You couldn’t run a 7-11 that way,” he said. “We can’t keep going like this, with political leaders trapped in the orthodoxy of their positions, unable to compromise. We’ve got to figure out a way to get people to start talking to each other.”

The Westmont Foundation sponsors the President’s Breakfast, and Chair Brad Frohling greeted guests at the event. Fellow board member John Davies, who chairs the President’s Breakfast committee, also spoke, as did President Gayle D. Beebe, who noted the importance of leadership and the college’s commitment to prepare students “to serve in every sphere of society and lead in every sphere.”

The students began by asking why they should care about the decisions that come out of Washington. Reminding them that our government is “of the people,” Powell said, “You will decide who’s going to be governing us. It’s much more difficult to do that now in the cacophony of noise we hear from television and radio and the Internet. But it places a greater burden on you to be informed citizens… [which] doesn’t mean just listening to your favorite guy on television or radio, but to question it. Does it make sense? Is he right?

“The Founding Fathers intended for there to be a constant clash of ideas and from that clash a consensus to emerge where both sides finally yield a little bit—not yield on principle, but yield a little bit in order to gain a consensus of moving the country forward. You are the people; you have to participate. It is your civic responsibility, it is your obligation to this country, and it is a reflection of what you’ve learned at this marvelous college.”

Noting that Powell went to Vietnam during the civil rights era, the students asked, “What were your thoughts as an African-American man on serving the nation during a time of national racial tension?” “I was an African-American soldier, but I was a professional soldier,” he said. “African-Americans, even in the worst circumstances, stepped up to defend the country when called upon. Before the Revolutionary War, black men served in the militias of America. In the Revolutionary War, one-sixth of George Washington’s army was African-Americans—same thing in the War of 1812 and the Civil War. After the Civil War, black men stayed on as buffalo soldiers.

“I’ve often reflected on that history: Even though we serve a country that does not serve us, it is our country, and we have to fight for it. The black men and women who served in the course of our nation’s history, with each conflict, made it clearer and clearer that we can’t keep being this way. With each passing generation, things started to improve. It is amazing how far we have come, but we must never think that the journey is over, because it’s not. So we have got to keep striving for everybody.”

Powell grew up in New York City in an immigrant family. “Do you think that a great American success story like yours is still possible for American children growing up in present times?” the students asked. 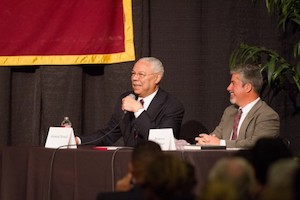 “Find something that you really love doing. If you do it well, that’s it. I went in the Army because it was something I loved doing, and I did it well, and I was serving my country. One thing led to another. People say, ‘What was the greatest award you got?’ I don’t think like that. My success and my satisfaction in life came from what I did every day. Every day I worked hard, and I did what I was supposed to do. I didn’t need to be a general; I didn’t need to get medals. I just needed to be able to serve successfully every day. Don’t think that real success ever comes from position or money. It comes from doing right, doing well, serving your fellow men and women, and believing that you are providing a service, and that you are a success.”