“Westmont has long been com-mitted to encouraging conversations that matter,” says President Gayle D. Beebe. “We seek to shape a national dialogue on the critical significance of moral and ethical leadership, inviting eminent historians to share their insights into the leadership of American presidents. We greatly appreciate the generous support of the Mosher Foundation in presenting these events.”

The series features four talks by prize-winning historians. Jon Meacham spoke on “The Moral and Ethical Leadership of Thomas Jefferson and Andrew Jackson” Oct. 10. Meacham won the Pulitzer Prize for “American Lion: Andrew Jackson in the White House,” and his latest presidential biography, “Thomas Jefferson: The Art of Power,” is a No. 1 New York Times bestseller.

Bob Woodward discusses “Presi-dential Leadership and the Price of Politics” Jan. 16. A reporter for The Washington Post since 1971, Woodward has won nearly every American journalism award. The Post received the 1973 Pulitzer Prize for his work with Carl Bernstein on the Watergate scandal and again in 2002 for his reporting of the Sept. 11 terrorist attacks. Woodward has written 16 best-selling books, including the recent “The Price of Politics.” 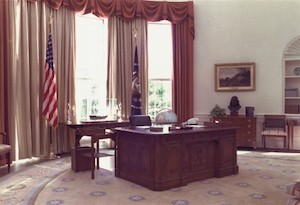 Eminent historian Doris Kearns Goodwin speaks at the 2015 Westmont College President’s Breakfast March 6. She has written six critically acclaimed and New York Times best-selling books, including her most recent, “The Bully Pulpit: Theodore Roosevelt, William Howard Taft, and the Golden Age of Journalism.” She won the Pulitzer Prize for “No Ordinary Time: Franklin and Eleanor Roosevelt: The Home Front in World War II” and may be best known for “Team of Rivals: The Political Genius of Abraham Lincoln,” which formed the basis for Steven Spielberg’s movie “Lincoln.”

Ronald White presents “The Moral and Ethical Leadership of Abraham Lincoln” May 29. He has written eight books, including “A. Lincoln: A Bio-graphy,” a New York Times, Washington Post, and Los Angeles Times bestseller and winner of the 2010 Christopher Award. His other Lincoln books are the best-selling “Lincoln’s Greatest Speech: The Second Inaugural” and “The Eloquent President: A Portrait of Lincoln Through His Words.”

White will also speak at a three-day conference, The Personal and Professional Development of the Leader, at Westmont May 26-28, 2015.

For more information about the series and the conference and to purchase tickets, see the Westmont website: www.westmont.edu/leadershipseries.