Westmont Magazine A Lifetime of Promoting Peace and Building Up Others 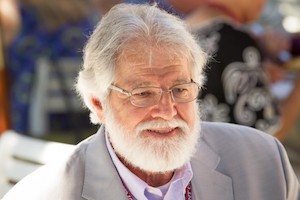 Most entrepreneurs establish businesses. Robin Wainwright ’64 develops ministries. George Blount, the late Westmont physics professor, once gave him a word from the Lord. “You start things, that’s what you do,” Blount said. “As I have gone through life, that’s what I’ve done,” Robin says.

Another word from God inspired Robin to enroll at Westmont (read more about Robin, 2013 Alumnus of the Year, here). He grew up in a difficult, dysfunctional family and knew little about God until he arrived at Westmont. He majored in philosophy and focused mostly on theology.

After graduating, Robin earned a Master of Divinity at Fuller Theological Seminary and served with a mission in the Middle East for a year, laying a foundation for his later life. He spent a summer in Harlem under a Lily Endowment grant building relationships with kids, which proved to be slow work. “Parents had abandoned these kids, and they didn’t trust anyone,” Robin says. “I learned at Fuller that the Gospel spreads through a web of relationships, so I wanted to create a program to build relationships for these kids.” In 1969, he and Lloyd Applegate ’69 started Sea and Summit Expeditions in Santa Barbara to take inner-city youth into the wilderness. “We went to the mountains for a month and trusted them to hold the rope as we climbed—and they started trusting us,” he says. The program still exists, based now in Bridgeport, Calif.

Robin finds it difficult to name all the ministries he has established and supported over the years. “I’ve been directly involved with eight different start-up ministries,” he says. “I’ve served on 11 ministry boards. And that doesn’t count seed funding and advice given to others while I served on the boards of three foundations.” He led the Jubilee Foundation in Chicago for three years and continues to serve as executive director of the Catlin Foundation in Florida. “I see a need, find someone who agrees, and help them fund it and get it going,” he says. “If you get the right people, they will surpass you.”

A number of his programs provide support for mission agencies or training for church leaders. For example, Paraclete Mission Group (PMG) connects start-up ministries with retired missionaries to train staff members in essential skills. Dale Ryan, a former student of Robin’s at Bethel Seminary, started Christian Recovery International to help churches develop programs for alcoholism, and Robin served on the founding board.

When he married his wife, Nancy, in Bethlehem in 1992, Robin says he also married Bethlehem, returning to the Middle East after many years. To call attention to all the Christians in the region, Robin recreated the journey of the Magi, which arrived on foot and camel in Bethlehem on Christmas Day, 2000. The procession took years to plan, and the Wainwrights built relationships with Christians and Muslims along the 1,200-mile route. The event appeared on television throughout the Middle East, showing Muslims that Christians took their faith seriously and also went on pilgrimages. The American media covered only the Intifada, which had just begun. Robin and Nancy established the Holy Land Trust and Middle East Fellowship to support indigenous programs for Christians and Muslims and to connect American Christians to these ministries and raise greater awareness about issues in the Middle East.

Robin finds a common thread weaving together his varied interests: wilderness, urban, children, recovery, non-violence, the Middle East. “In Romans 14:19, the Apostle Paul tells us to “pursue (strive energetically for) the things that promote peace and the things that promote the building up of one another,” he says. “I’ve been engaged in doing that these 50 years.”