President Beebe Will Speak Across the Country about His Book on Leadership and the Need to Develop Moral, Effective Leaders. 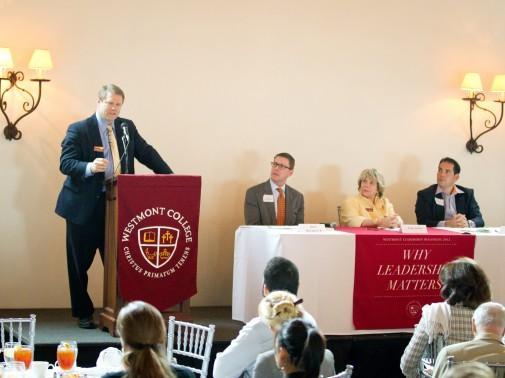 Recognizing that leaders matter, President Gayle D. Beebe has written a book about leadership that reflects his experience as a college president and his MBA studies with Peter Drucker.“The Shaping of an Effective Leader: Eight Formative Principles of Leadership” emphasizes the importance of both character and competence in leadership development.

“Character is the foundation of all leadership responsibilities,” Beebe writes. “Threshold competencies, built on our character, determine enduring effectiveness. . . . A moral leader can only be effective if he or she has the competency to manage all the other levels of the organization.”

To encourage alumni, parents and friends to explore effective leadership, the Office of Alumni and Parent Relations has launched Westmont Leadership Dialogues 2012. Beebe is speaking at a series of lunch­eons on the topic,“Why Leadership Matters: Discussions on Effective and Moral Leader­ship for the 21st Century.”A panel of alumni and guest experts join him at each event.

“Since its founding 75 years ago, Westmont has cultivated thoughtful scholars, grateful servants and faithful leaders for global engagement with the academy, church and world,” says Teri Bradford Rouse ’77, senior director of alumni and parent relations. “Shaping leaders equipped to fulfill God’s calling in their lives remains a central com­ponent of the college’s mission.

“Westmont Leadership Dialogues 2012 builds on this tradition. These lunchtime conversations delve into the pressing need for effective and moral leadership in our society and world. President Beebe’s interaction with distinguished alumni panelists creates a thought-provoking dialogue.”

Members of the Westmont community interested in thinking more critically about effective leadership and being empowered to serve more faithfully as leaders can sign up to attend one of the luncheons. Locations include Los Angeles, Santa Barbara, Pasadena, Washington, D.C., San Jose, Seattle, Denver, Orange County, the North Bay area, Dallas, Thousand Oaks and Phoenix.