Westmont Magazine Magazine Names Westmont as eCampus of the Month 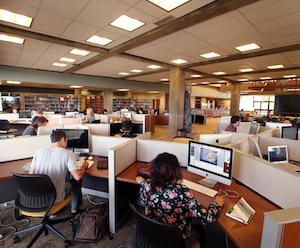 The magazine eCampus News chose Westmont from nearly 4,500 colleges and universities as the eCampus of the Month for January 2012. The publication, which boasts a readership of more than 51,000 higher-education leaders, says Westmont has “implemented predictive modeling and cloud-computing programs to save money and spend budgets efficiently, becoming a model for small schools looking for ways to survive the slumping economy.”

The magazine lauds Westmont for uploading thousands of lectures to iTunes U and refurbishing the library for the modern needs of today’s college students. Reed Sheard, vice president for college advancement and chief information officer, says the college is honored to be in the company of institutions such as the University of North Carolina, the University of Chicago, Seton Hall and Abilene Christian University.“Westmont has become increasingly effective in a wide range of technological areas,” Sheard says. “Our information technology department has strategically analyzed where the college is heading and positioned it to capitalize on tools that will enable us to fulfill our mission. We’ve also been able to excel in these new areas in interesting ways without increasing the budget or adding personnel—we’ve actually cut the budget.”

In the article, Sheard describes how systems went offline for hours or even days.“We’ve had a history of problems, so our current achievements testify to how well the IT team has done.”

In 2009, the college emerged as a leader in wireless technology, becoming one of the first U.S. schools to move to an 802.11n wireless network that creates a high-speed wireless cloud over the entire 111-acre campus. That year, InfoWorld recognized Westmont as one of the top 100 IT organizations in the United States. Last year, Westmont released applications for the iPhone and iPod Touch and an iPad version of the Westmont magazine.