In the face of uncertainty and innumerable challenges, Westmont’s Music Department safely produced a season full of beautiful melodies and memories. In February, the department premiered a film version of “The Elixir of Love,” a two-act opera by Italian composer Gaetano Donizetti. Christina Farris Jensen ’09 directed the production with Michael Shasberger, Adams professor of music and worship, serving as music director, and instructor Sara Rockabrand as vocal director. The rehearsals and filming adhered to strict COVID-19 safety guidelines, and the cast and crew creatively integrated social distancing and other rules into the opera itself.

Safety regulations presented many difficulties. How do you tell a love story without letting the lovers get close to one another? The cast also kept prop-passing to a minimum, often opting for impressive games of catch onstage. The opera worked on the “bubble principle” designed for contact sports. The cast split into pods: one for the chorus, another for leading characters, and a third for understudies. The pods rehearsed separately to limit exposure in case anyone developed COVID-19. While they completed filming, the arrangement had many drawbacks. “The biggest challenge of an opera should be creating beautiful music and inspiring storytelling,” Shasberger says. “While those were certainly not diminished, the obstacle of achieving them while working outdoors, six feet apart and with masks on made it all the more daunting.”

“Many times the production team hit a seemingly impassable situation,” Jensen says. “The only thing we could do was pray for God’s wisdom and guidance. Instead of boxing God into my direction, I submitted the entire process to him. The challenges we faced reminded me that God directs every aspect of our lives.

“This cast learned to lean on each other for support, encouragement and help. My favorite moment was the cheer that erupted when Dr. Shasberger called an end to the final day. To overcome so many odds and successfully accomplish such a challenging task overwhelmed us all, and we could do nothing else but cheer.”

“It took a great deal of dedication, discipline and sacrifice to make the opera possible this year, which is perhaps why it meant so much more to everyone involved,” Shasberger says. 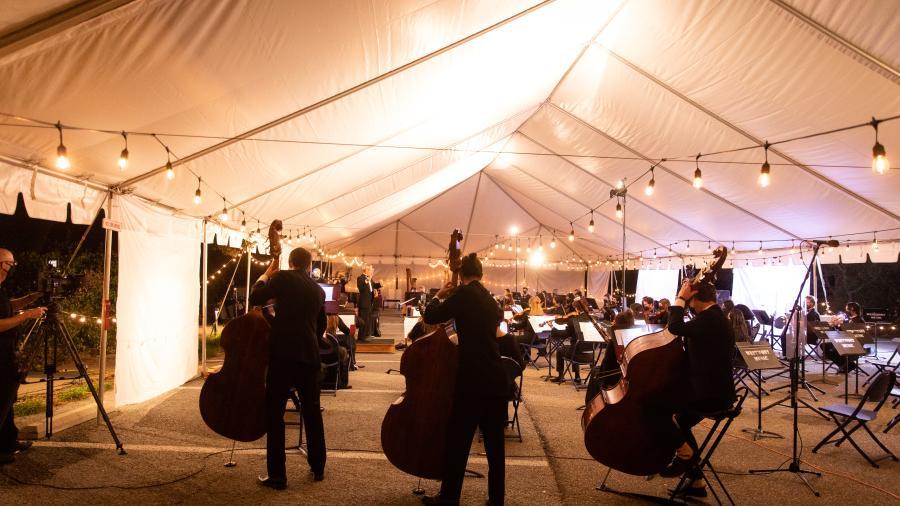 The music department also released a recorded musical performance almost every Friday during the academic year, including several by the Westmont College Choir (watch them at westmont.edu/music). The members rehearsed together outside and socially distanced. They also separated into pods with three and, later, two groups of singers who only combined for dress rehearsals and recorded performances. During his first year conducting the college choir, Daniel Gee ’13 has maintained both the safety and the camaraderie of the ensemble while building his own connections with choral students. He earned his D.M.A. during the 2020 fall semester and has taken a prominent role in the music department’s collaboration with the Santa Barbara Symphony.

“During challenging times, seeing a performance come together is even more of a joy, an accomplishment and a relief,” Gee says.