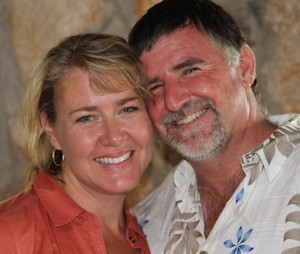 The winding, dusty road to the camp ends unexpectedly with hills, woods and water. In the heart of Zimbabwe, Shelley Schar Croudace ’92 and her husband, Alistair, have created Lasting Impressions Wilderness Training Center (LIWTC) on 450 spectacular acres. Thatched stone buildings and landscaped walkways sit amidst tall acacia trees along a river. Antelope, monkeys, baboons and other wildlife wander the property. This scenic splendor provides a backdrop for LIWTC’s mission of introducing youth to Jesus Christ by teaching them about the natural environment, training them to be leaders and helping them develop effective skills for living (www.lasting-impressions.org).

Shelley showed her heart for missions at Westmont. Participating in Potter’s Clay each year, she co-led the ministry her junior year and co-directed World Missions as a senior. She wrote a paper on AIDS in Africa and planned to earn a master’s degree in public health after graduating with a degree in sociology. But Jim Mannoia, her philosophy professor, had taught in Zimbabwe and encouraged her to devote six months to an AIDS education program there.

She never made it to graduate school. Through Scripture Union (SU), she taught high school students in Harare about AIDS, adapting the curriculum for seventh graders when she realized high school was too late. She also spent time at a SU camp nearby, where she met Alistair. They married in 1994.

Both Shelley and Alistair had worked at Christian camps—Shelley at Forest Home—and they felt called to establish one in Zimbabwe. Envisioning a place where youth could hear the Gospel and develop their faith and skills, they began planning in 1995. Two years later, LIWTC held 24 camp sessions after extensive work at an old, five-acre camp a Baptist church had offered them. In 1999, they purchased their present site, and they moved there in 2003 with only rustic accommodations. Slowly they developed programs and buildings, seeking excellence in everything they did. Today they can accommodate 90 people.

Last year, LIWTC hosted 47 camps, focusing on youth but also offering men’s and women’s retreats and corporate management training. Zimbabwe’s Department of Education has approved a week-long course for seventh graders, and most campers come from schools, both public and private. “Zimbabwe needs a new generation of strong leaders who will lead with integrity and make wise choices,” Shelley says. Churches fund camps for orphans and children with disabilities, many of whom can’t afford the cost of public education. LIWTC teaches them living skills so they can survive in a country with high unemployment.

“We’ve seen thousands of kids come to the Lord,” Shelley says. “But I’m more excited about the transformation of our interns, who serve in ministries all over the world.” Every morning at 5:45 a.m., she meets with interns for an intensive Bible study. “Quality leadership involves multiplying yourself, investing in people at a deeper level and rejoicing when they surpass you in ability.” She also educates their three children, Micaela, 18, Rachel, 15, and Caleb, 12, through a homeschool cooperative with five other families.

Westmont taught Shelley to value community and lifelong learning. “I’ve carried those lessons into ministry, connecting with folks and being enthusiastic to learn, working together to overcome problems and not just doing it on my own,” she says. “The leadership training was so practical—it encouraged me to take risks, do things with excellence and serve the Lord wholeheartedly.”