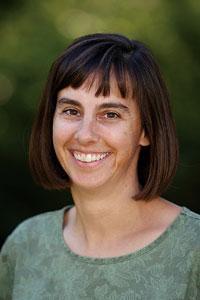 Patti Wilger Hunter ’88 and her husband, Dave, are partners in every sense of the word. They work together to care for their two children, divide up household duties such as cooking, and even share a job. The Hunters are the first husband-and-wife team to split a full-time faculty job at Westmont, and the arrangement has worked well for the couple and for the college.

After graduating from Westmont with a degree in mathematics, Patti went to graduate school at the University of Virginia in Charlottesville, where she met Dave. They both earned master’s degrees there and completed doctorates in mathematics in 1997. For his first job, Dave taught for three years at North Central College in Naperville, Ill., and Patti cared for their newly born son, Andy, and later for their daughter, Ruth, as well. After much deliberation, they came to Westmont in 2000.

“I had never thought about living in California or sharing a job,” Patti says. “But we are thrilled to be here.”

Patti and Dave each teach three mathematics courses a year, occasionally adding a class as an overload if the need arises. They split faculty committee assignments, and both have a certain number of students they advise.

“The challenge is to keep from doing too much, as work expands to fill the time available,” Patti says. “I have a rewarding job, and it takes discipline to draw the line at the number of hours I work each week.”

Living in Las Barrancas, the 41 affordable faculty homes adjacent to campus, allows the Hunters to manage on one income. “It’s like being back in the 1950s,” Patti says. “The kids can play outside with friends they’ve known all their lives. We know all our neighbors, and it’s easy to go back and forth from home to work. Las Barrancas lets us integrate our lives, friendships and jobs, making us less compartmentalized. We can show our children a different kind of life than they see in the world.”

One benefit of splitting a job is time to spend on research in their areas of expertise. Patti has focused her studies on the history of mathematics.

In a recent paper, she explores the career of the first woman to chair the statistics department at North Carolina State University and her contributions to the discipline. For her next project, Patti is searching the Ford Foundation archives to learn more about American scientists who taught overseas as part of a Cold War effort to keep certain regions from embracing Communism. She’s curious to discover the role that science departments played in promoting U.S. foreign policy and American interests abroad. She wonders about parallels to the current situation when terrorism, not Communism, is the threat. Would a similar program work today?

Teaching part time also enables Patti to volunteer in the community. She worked for six years as a manager at Transition House, a shelter for homeless families in Santa Barbara. She has also assisted Ruben and Holly Seguine ’93 Gil in running their Kids Club ministry, a backyard Bible study on the east side of town.

Last fall, the family spent the semester in Querétaro, where Patti and Dave led Westmont in Mexico. This program allows students to study abroad and still spend time with Westmont professors and students. “Some students are ready to go off on their own in Mexico, and others appreciate the safety net,” Patti says.

The Hunters enjoyed the semester. “Our children enrolled in Mexican schools and their Spanish is now very good. It was challenging to adapt to such a different environment: an urban setting, a foreign culture and an intense immersion. I improved my language skills and discovered I could function in another culture. It was a challenge to do simple things like paying the electricity bill, but it was also fun to be stretched.”

As a mathematics student at Westmont, Patti appreciated the department’s emphasis on collaboration. “We met weekly to do homework together,” she says. “Mathematics is a communal activity, and scholars collaborate with their colleagues. At graduate school, a lot of the students weren’t used to that yet, and I gravitated to the ones who were — it helped me survive.”

Patti says the department has a history of being hospitable to women who want to major in mathematics and pursue a career in the discipline. “That’s one of the reasons I’m here today.”