In August, 445 new students started their Westmont careers: 379 in the class of 2018 and 66 transfers from other schools. The first-year students represent 29 states and include two National Merit Scholars. A third of them (127) are North American ethnic minorities. 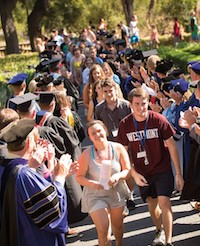 “The entire class of first-year and transfer students is very diverse in general, not just ethnically diverse, but socio-economically diverse,” says Silvio Vazquez, Westmont dean of admission. “This reinforces the hard work of the college overall to make a Westmont education affordable and attainable.”

Four Monroe Scholars, who have an average honors GPA of 4.54 and an average SAT of 1530 out of 1600, received full-tuition scholarships: Hugh Grant-Chapman of Goleta, Calif.; Leandra Marshall of Eureka, Nev.; Samuel Muthiah of Altadena, Calif.; and Hailey Wiper of Eugene, Ore.