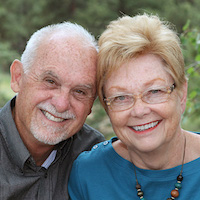 Jim ’70 and Sue Bergman ’71 DeVries have shared a lifetime of marriage and ministry. They raised three daughters overseas as missionaries with One Challenge International (OCI), and all three now serve on the mission field them-selves with the 10 grandchildren. After 38 years, Jim and Sue have moved to Colorado but still work with OCI.

The DeVries began their career in Ghana, teaching high school after earning degrees and credentials at Westmont. Feeling isolated, they decided they preferred a team approach, and they saw the need for educated pastors. Jim then completed additional study at Mennonite Biblical Seminary in Fresno, and they joined team-centered OCI. After a few years in the Philippines, they returned to Africa. “That’s where our hearts were,” Jim says.

Based in Kenya, they spent 20 years with eight families training pastors, traveling throughout Kenya and East Africa. “We got pastors of all different denominations together,” Jim says. “This kind of fellowship strengthens the body of Christ. We learned that at Westmont, where we made friends with people from all denominational backgrounds. We’ve always sought to work with the whole body of Christ and all the people who love Christ.”

During one furlough, Sue earned a master’s degree in communications at Wheaton College. Her adviser, Mark Fackler ’69, was editor of the Horizon when she worked as a copy editor for the student paper. She later taught journalism at DayStar University in Nairobi.

In 2006, OCI asked them to move to Cyprus to support missionaries in the Middle East, who face ongoing stress. Jim used his experience at a Christian counseling center in Nairobi to help people stay healthy and avoid burnout. Sue, who’d edited a magazine for African pastors, developed a newsletter for workers in their new region.

“Missionaries face so many stresses, and many don’t go back after their first term,” Sue says. “Building relationships takes time. We felt God was really using us in our second and third terms—we were just getting established in our first.” They encourage missionaries to persevere and learn the language and the culture.

Working with new members and summer interns has helped Jim and Sue understand the impact of technology on the mission field. “Young people expect to be connected to social media while overseas, so they have one foot back home and the other in their new country,” Sue says. “It makes it more difficult for them to commit and more likely they will bail when it isn’t fun anymore. Easy access to friends and family keeps them from meeting their social needs through local people, and they are less likely to attend the local church and support the pastor.”

“We tell them the Lord can use them,” Jim says. “But it takes time for that to happen.” In caring for other OCI workers, the couple sometimes deals with conflict and difficult situations. “We learned how to do that at Westmont from Rosemarie Springer,” Sue says. “She taught us to hold people accountable even when it’s uncomfortable. It’s the most loving thing you can do for one another.”