The Westmont Ridley-Tree Museum of Art opens its fifth year of exhibits with an ambitious schedule. The festivities began with a fundraising exhibition, “5×5: Celebrating Five Years,” featuring more than 300 small-scale pieces of art sold through an online auction. The event raised $19,000. 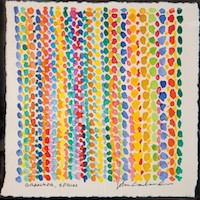 “I’ve been delighted by the generous response to our fundraiser,” says Judy L. Larson, Askew professor of art history and director of the museum. “It’s amazing how small, five-inch squares of paper can be transformed into unique works of art.”

The second show of the season highlights eight artists gaining promi-nence in Southern California, “ArtWatch 2014: Young Careers—SB to Greater LA.” “We’ve launched this new series, ArtWatch, to focus on different issues and themes that engage contemporary artists living on the West Coast,” Larson says. “This first exhibition features artists who are young in their careers, but already fully launched.”

Upcoming exhibits include the West Coast premiere of internationally famous Chakaia Booker (Dec. 11-Jan. 31) and “Rembrandt and the Jews” (Feb. 12-March 28). The annual senior show appears in May and June, and the season ends with “Vital,” the yearly Tri-County juried exhibition.

The museum first opened during the 2010-11 season with an art collection of 453 objects, valued at $2 million. As of June 2014, the collection has grown to 1,545, valued at more than $15 million. Past shows include a range of artists, from Jean-Baptiste-Camille Corot to American outsider and Australian Aboriginal artists.