Westmont College’s women’s basketball team rallied around their coach after her husband’s sudden death. Their final gift: a title.

Montecito — Her final pep talk wasn’t a pep talk at all. Kirsten Moore was beyond pep.

Her final pep talk, given while surrounded by her Westmont College women’s basketball team before the NAIA national championship game, was her chance to say thanks.

Moore thanked her team for keeping her soul alive. She thanked them for sitting in the third row for her husband’s funeral, for playing with her infant daughter in the third row of the team bus, for sharing her pain and embellishing her joy. She thanked them for their patience when she was weeping at an unseen memory, or staring blankly into an uncertain future, or disappearing just before tipoffs to nurse her child.

“Thank you for loving me,” she said.

“This whole season has been pretty much insane,” said Westmont guard Larissa Hensley.

You’re looking for one shining moment?

“There have been so many tears this year,” said Westmont forward Kelsie Sampson. “But there has also been so much joy.” 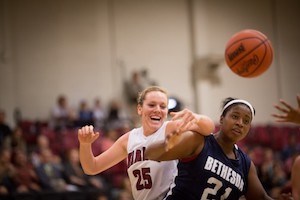 What happened to the women’s basketball team from the tiny school tucked into the lush hills south of Santa Barbara cannot be found in brackets, cannot be wagered in an office pool, and is too outlandish even for a Cinderella.

Many in the close-knit Westmont family thought Moore would take a sabbatical. It is difficult enough to be a grieving widow and a single mother. How could anyone possibly carry both burdens while coaching a basketball team?

“I could never coach again right after all that,” said Hensley. “How do you go right back into it? Wouldn’t you need to take a year off?”

Moore barely took a day off. Buoyed by her late husband’s plea that his Crohn’s disease never stop her from chasing her dreams, fearful that she would be swallowed in suffering if she didn’t keep moving, Moore was at the front of the room when she met her team in August for the 2012-13 season.

On the court, an average team with one superstar — Turkish national player Tugce Canitez — won 24 of 27 regular-season games. Off the court, friends and neighbors and wives of faculty members formed a baby-sitting squad that watched Alexis during games, practices and sometimes even at 6 a.m. when an exhausted Moore texted that she needed one more hour of sleep.

“At my very core, this is not a story about me, it’s about an incredible community of people that have come together in the wake of a really devastating tragedy and rallied in extraordinary ways,” said Moore, 37.

By the time the Warriors reached the March 19 national title game in Frankfort, Ky., against Lee University from Cleveland, Tenn., it was such a surprise, most of their support group didn’t have time to make arrangements for the trip. A school official counted only 15 Westmont fans in the stands. The players dried their eyes and took the court as if flying.

“It was really weird, we were all really tired, but suddenly we felt such energy, like we could do anything,” said Sampson.

They met at Westmont, eight years ago, the basketball coach and the kinesiology professor. Kirsten McKnight didn’t have time for romance. Alex Moore thought they were made for each other.

“I told him this was never going to happen, I just crushed him,” Kirsten recalled. “But, like my basketball team, he kept coming back.”

They began dating, just in time for Alex to begin a four-year doctoral program at the University of Missouri. It didn’t stop them.

When they were married in the Westmont chapel in the spring of 2008, her players carried him on their shoulders. When he finally returned to Westmont from Missouri two years ago, their long-distance courtship had ended.

“Everyone here was so happy for them, they were finally in the same place, finally starting this wonderful life together,” said John Moore, who is no relation. 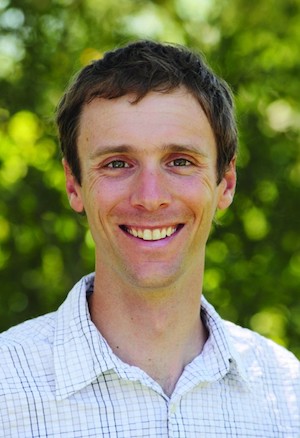 Last spring, that life was shattered. Alex, who underwent surgery at Cedars-Sinai as a treatment for Crohn’s disease, died about 12 hours after the operation had been deemed a success. He was 31. A blood clot struck in the middle of the night, long after he ordered Kirsten to return to a friend’s house and get some rest.

She was sleeping when the hospital called. She sat on a bed and screamed. She was eight months pregnant.

Two days after Alex’s death, while rummaging through his office to prepare for his memorial service, she noticed two Post-it notes stuck to the wall. She had never seen them before. They contained two Bible verses in his handwriting.

One verse read, “Encourage the oppressed, defend the cause of the fatherless, plead the case of the widow.” The other verse read, “Be strong and courageous and do the work, do not be afraid or discouraged for the Lord God, my God, is with you.”

She turned to her mother and said, “These are Alex’s final words to me.”

Three months later, standing shakily in front of the team, she began doing the work, but she couldn’t do it alone.

The care of Alexis was coordinated by four members of the Westmont community. Deanna Odell and Jill Wolf, both athletic department wives, watched the baby during Moore’s daily office duties; Nicole Knecht, a faculty wife, watched her during late-afternoon practices. JenShinn, a longtime friend, cared for her during games that Alexis’ two sets of grandparents, who both live out of town, could not attend.

“This tragedy occurred and we’re all like, OK, how are we going to help her?” said Odell, wife of the Westmont athletic director, Dave Odell. “It’s just how our community works.”

During those games, the baby might get passed around by as many as 10 eager neighbors and friends, although Shinn was in charge of special times. She has missed the first half of games because she was carrying Alexis through gym lobbies so her mother wouldn’t hear her crying. Once she tried to change Alexis’ diaper on an aluminum bleacher in the women’s bathroom.

“When this child grows up, she’s going to know who her village is,” said Shinn.

Sometimes Alexis just hung out with the team, which led to wondrous moments like the time a film session was interrupted by a player screaming, “Look, she’s finally crawling!” There have also been awkward times, like the bus trip when Alexis, whose car seat is placed in a third-row window seat, became fussy and needed nursing. Because the men’s and women’s teams travel together, Kirsten had to ask the men to turn their heads.

“Kirsten could have ran, we all could have ran,” said Selena Ho, one of four assistant coaches who worked endless hours to support her. “Instead, we gave these young women a chance to see, firsthand, how to handle real adversity.”

While Alexis could be comforted, Kirsten was a different story. After an early-season victory at Pepperdine, she cried all the way home because she missed sharing it with Alex.

“It was so hard to realize that even winning wasn’t going to be easy,” she said. 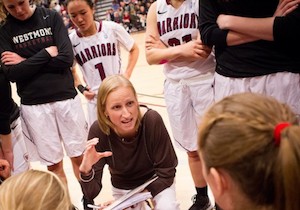 But when things were the darkest, it seemed her team always showed up to ease her burden. Westmont lost consecutive early-season games by double digits, then regrouped in an emotional game against San Diego Christian on a night when Alex was publicly remembered at halftime.

In that game, Hensley sank a running three-point heave at the halftime buzzer to give the Warriors a lead it never lost, and Moore made an unusual note on the stat sheet.

“I gave the assist to Alex,” she said.

After those two losses, the Warriors won 21 of their next 22 games en route to a spot in the NAIA championship game against Lee. One of the greatest athletic feats of that run didn’t happen on the court, but after they had clinched their Golden State Athletic Conference championship, when Moore climbed a ladder and cut down a bit of the net while holding scissors in one hand and Alexis in the other.

“I got up there and realized, wait, I’ve got no free hands!” she recalled. “I’m never doing that again.”

But even in her happiness, there was pain and perspective. The night before the championship game, Moore wept uncontrollably in the shower.

“Everything hit me at once and I realized, this is not about a basketball game, it was about a test of the human spirit, and we had passed that test, and accomplished something bigger than ourselves, and what else mattered?” she said.

A Message from Kirsten

Although I found myself in circumstances I never could have anticipated this year, I also never could have imagined the way our Westmont community has come alongside Alexis and me on this journey. From my departmental colleagues, whom I work beside everyday, to the extended Westmont family all over the world, you have tangibly lived out Christ’s love with your support, encouragement, and faithfulness. In the Sermon on the Mount in Matthew 5, Jesus challenges his followers to, “Let your light shine before others, that they may see your good deeds and glorify your Father in heaven.” Thank you for shining your light as I have walked through this shadowed valley. To Him be all the glory.

This revelation led to her pregame thank-you speech, which led to her players’ tears, which then led to them tearing up the floor, pulling away from Lee with eight minutes remaining for a 71-65 victory and a national championship.

They didn’t save the game ball. They left the trimmed net behind, and it was mailed to them. The trophy sits on an old desk next to a giant paper cutter outside Moore’s tiny office.

What they kept were the hugs. Immediately after the victory, Moore climbed into the stands and retrieved Alexis, brought her to the floor and stood in front of the bench while, one by one, her players went over and cradled them both in their sweaty arms.

“This is for you, Coach,” whispered Sampson.

A week later, after remaining in the Midwest to spend time with Alexis’ grandparents, Kirsten Moore made her triumphant return to Westmont alone. It was shortly before midnight in the Santa Barbara airport. With Alexis, she was the last person off the plane and was wearily dragging everything toward the gate area when she saw them.

Two dozen people, Westmont people, church people, neighbors, friends, community, waiting for her, cheering for her. She slung her diaper bag over one shoulder, fitted her daughter in the stroller and slowly walked toward the love.