Music Ministry and Giving Back through a Charitable Remainder Trust 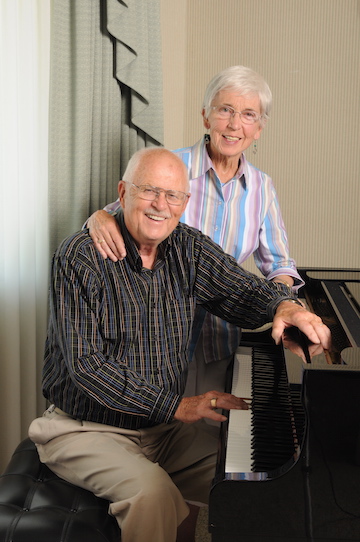 For more than 65 years, Howie Stevenson ’50 ministered through music, often in partnership with his late wife, Marilyn Danielson Stevenson ’53. At college events, in churches and during summer conferences they shared their musical gifts with skill and joy. Years later, many alumni vividly remember Howie’s energetic hymn sings in chapel. As a student, Howie performed with the Westmont Quartet in a different church every Sunday and toured during the summer. In 1950, the group went to Europe with Ruth Kerr, Westmont’s founder. “My experience with the quartet taught me to think on my feet, speak in public and meet new people,” he says. “I’ve spent my life working in front of the public, and my years at Westmont prepared me well. What I learned musically from Professor John Lundberg I could never get from a book. What a blessing and gift Westmont has been.”

Howie received a master’s degree in music at the University of Washington and joined the music faculty at Multnomah Bible College in Oregon. In 1963, Lundberg recruited him to teach at Westmont, which he did for 18 years, earning a doctorate at USC. Howie ended his career as a music minister at First Evangelical Free Church in Fullerton, California, with Chuck Swindoll. When he retired in 2003, the Stevensons returned to their Santa Barbara home. They sold their house in 2007 and moved to Mount Miguel Covenant Village in the San Diego area where their daughter Beth Gwinn ’81 works.

With the proceeds from their home, the Stevensons funded a charitable remainder trust that provided them secure income for life and that will benefit Westmont and other organizations upon Howie’s death. “The financial advantages are significant,” Howie says. “The trust solved our tax problems and allowed us to give back to Christian ministries that have influenced our lives.”

Reproduced and adapted with permission from the summer 2008 issue of the Westmont College Magazine.

For more information about the tax-related benefits of using appreciated property to fund a charitable remainder trust, please contact the Office of Gift Planning at (805) 565-6058 or giftplanning@westmont.edu.