Serving the Lord by Remembering Westmont in their Trust 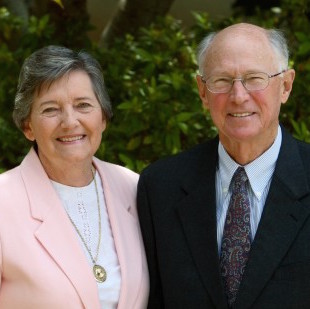 Gracious, selfless and caring, John Watts helped countless people plan their estates prior to his death in 2015, at the age of 85. He built strong support for Westmont through his heartfelt friendships and, in partnership with his wife Patty, John developed the college’s planned giving program. He and former director Iva Schatz established the college’s legacy society, the Wallace Emerson Society, to honor and thank the many people who remember Westmont in their estate plans.

John described his work as helping people leave a legacy. He asked them, “What do you have, and what do you want to do with it to benefit the people and charities that mean the most to you?” The resulting conversations and decisions delighted and gratified him. He became close to many of the people he wisely advised throughout the years.

All three of the Watts’ children graduated from Westmont (Bruce Watts ’79, Kathi Walker ’82 and Vicki Cope ’86), and so did Kathi’s husband, Dan Walker ’82, their daughter, Hanna Walker Wagner ’10, and their son-in-law Cody Wagner ‘16.

John and Patty valued the education their family received and wanted to offer the same opportunity to others. They retired in 1996 and adopted a family mission statement that summarizes their approach to life: “Let’s serve the Lord by serving our family and extended family (Westmont and the remainder of our community) in the way we serve best, and let the Lord take care of the rest.”

John and Patty included Westmont in their revocable trust, and the Watts family has stayed close to the college. John’s lifetime work lives on in the estate plan provisions that will benefit and strengthen Westmont for years to come.

Reproduced and adapted with permission from the September 2013 issue of the Westmont Magazine.

For more information about how to include the college in your trust, please contact the Office of Gift Planning at (805) 565-6058.