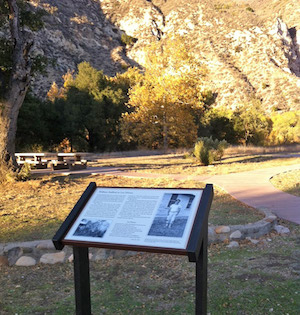 During World War II, poet William Stafford (1914-93) spent two years in the Los Padres National Forest north of Santa Barbara working in the Los Prietos Civilian Public Service Camp. For the past six years, Paul Willis, professor of English at Westmont and poet laureate of Santa Barbara, has organized an annual reading of Stafford’s poetry close to the site of the camp. Thanks to his efforts, a sign now marks its location and honors Stafford.

The poet won the National Book Award in 1963 and became poetry consultant to the Library of Congress in 1970 and poet laureate of Oregon in 1975. “Stafford gained his confidence as a poet at the Los Prietos Camp, and he met his wife, Dorothy Hope Frantz, there,” Willis says. “He and others rose before dawn each morning to read and to write, a habit he kept for the rest of his life.

“Los Prietos was one of about 150 Civilian Public Service camps scattered about the nation, many of them in national forests. The Selective Service Act of 1940 had provided not only for a military draft but also for alternative service involving ‘work of national importance.’ Thus about 12,000 men served in these camps during the war building trails, planting trees, and fighting fires.”

Willis will dedicate the sign at the annual reading Jan. 26, 2013. Paulann Petersen, board member of the Friends of William Stafford and current poet laureate of Oregon, and Mark Sargent, provost of Westmont, will participate in the event. Earlier in the day, Petersen will lead an all-comers community workshop at the Los Prietos Ranger Station. Poets and would-be poets of all conceivable levels of ability will use some of Stafford’s poems as a springboard for creating their own.