Westmont Magazine The Poetry and Prose of Publishing 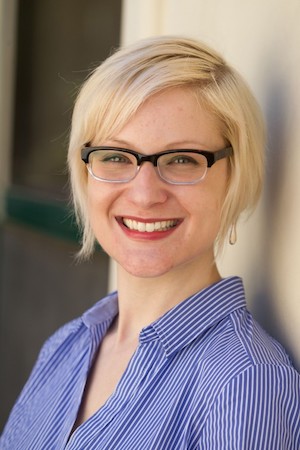 Kelly Gruver Davio ’04 grew up in churches with fringe views and highly unorthodox practices. “Conversation about Christianity at Westmont was mind-blowing,” she says. “I discovered there were other ways of thinking about Christianity and that people could discuss and debate their views and agree to disagree. Westmont broadened my perspective, and I’m grateful.” Her youth and education both shape her work as a poet, editor and teacher.

In 2008, Kelly became the managing editor of LA Review, a semi-annual publication based in Pasadena and published by Red Hen Press. Writers from around the world contribute poetry, fiction, works in translation, essays, interviews, profiles and book reviews. Seeking good West Coast representation, LAR dedicates each issue to a West Coast writer. Kelly recently featured poet Madeline DeFrees, a former nun with the Society of Jesus, who left the convent to write as an act of devotion. Her story appears in an issue about people who write and think about Christianity.

Red Hen Press editor Kate Gale taught as a visiting lecturer at Northwest Institute of Literary Arts when Kelly earned a Master of Fine Arts in poetry there. The two women connected and have worked to make LAR more professional. “We’re solvent,” Kelly says. “Each issue pays for the next one. As our subscriber base grows, we hope to pay contributors. Serving as managing editor has been an education in the publishing business, which is invaluable for me as a working writer. Writing is not just an art, it’s a business. I find self-promotion distasteful, but it’s part of the job, and you have to do your job.”

In March, Red Hen Press published “Burn This House,” Kelly’s first book of poetry. “The collection features the strongest of the work I’ve been writing since I left Westmont,” she says. Kelly serves as associate poetry editor for Fifth Wednesday Journal, based in Chicago, and she writes book reviews for Women’s Review of Books, a scholarly publication from Wellesley College. She is a Pushcart nominee whose work has been honored in Best New Poets. Her poems appear in many journals, including Gargoyle, the Cincinnati Review, Bellingham Review, the Evansville Review, the Portland Review and Pank.

Kelly also teaches ESL at Bellevue Learning Center in Seattle. “My students are hard workers with a good sense of humor,” she says. “Learning English can be tricky for teenagers, but I’m blessed with students who work hard to meet the challenge. Writing, teaching and editing are a wonderful triad that feed one another. My students have a way of grounding me; their real-life concerns get me out of my own head. I have learned to be compassionate about their writing as I can relate to their challenges with my own experience struggling as a writer. I can demonstrate the generosity to them and to the writers I edit that I would want to receive. It’s a fine balance.”

In college, Kelly participated in England Semester and the Oxford Program through the Center for Medieval and Renaissance Studies. “I wanted to be a writer, whatever that meant,” she says. “I took as many English classes as I could to get a broad base and do the reading necessary for a good foundation for writing.” She met her husband, Peter ’02, at Westmont. An English and philosophy major, he works for Microsoft as a software engineer and program manager.

“Writing has no glamour,” she says. “It can be grim, sad and lonely sitting around alone in a room. You have to be passionate about it and stick with it.”