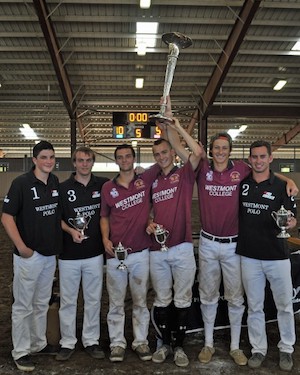 “The game was very close and hard fought the whole way through,” says team captain Patrick Uretz. “The CSU Rams played amazing. I will remember bringing the national title back to the West Coast for the first time since 1986, winning Westmont’s first-ever national polo title and sharing that win with my brother, Tony.”

The Warriors beat defending champions University of Virginia 15-13 and Southern Methodist University 19-12 before facing CSU. Last year, the Warriors came in second place after narrowly losing to Virginia in the national championship game. Westmont also played in the finals in 2007.

Patrick and Tony Uretz were named All Stars at the tournament, and Patrick is on the USA Collegiate Challenge Team.

To qualify for the finals, Westmont won the USPA Western Regional Intercollegiate Tournament, defeating Stanford and Idaho.“Going into the tournament seeded fourth or fifth and winning the whole thing is a David-and-Goliath story,” says John Westley, the owner/operator of the Santa Barbara Polo School who has coached the club sport for the 13 years.

When the squad arrived in Texas, Westley learned that two of his top players, Patrick and Tony, were battling flu-like symptoms.“I thought this wasn’t going to be our year,” he says. “It was quite a surprise.” Next year, all three starters return, and Westley expects the team to be a strong contender.