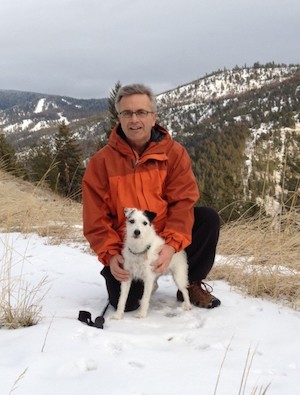 Ray Callaway ’78 considers Montana an ideal place to study ecology, but his research takes him throughout the world. In his Callaway Lab and greenhouse at the University of Montana (UM), he explores how organisms interact with each other. The prolific and much-cited scholar has built an international reputation in two areas of ecology: positive interactions and invasive species.

Unfocused in his biology studies at Westmont, Ray grew interested in nature through classes and research guided by Professor Frank Percival. “He motivated me,” Ray says. “I wanted him to approve of what I did.” Ray drifted into a master’s program in ecology at the University of Tennessee and earned a doctorate at UC Santa Barbara. “I didn’t know what I was doing, but I found what I love,” he says.

Ray first attracted notice by studying positive interactions in the environment. “The emphasis on competition in the study of nature is overwhelming,” he says. “I thought positive interactions had been left out of the picture.” This contrarian position met initial scorn, but Ray persevered. Charles Janson, associate dean in the division of biological sciences at UM, wrote, “He was championing this idea when it was still almost universally ignored or even dismissed as implausible or trivial. His convincing blend of experimental data and conceptual synthesis has turned the tide.”

Invasive species now occupy most of Ray’s time. He travels worldwide to discover how exotic invaders dominate habitats and suppress native species, examining the invaders in both their original and new environments. The absence of organisms that keep them in check in their native habitats may explain their success. Positive interactions in the new environment could also play a role. Ray works closely with researchers from Europe, the source of many U.S. invasive species. Since 2005, 28 visiting scientists from five continents have worked in his lab. Ray has also taught in six countries. “I’m a good collaborator,” Ray says. “I have fun doing this science, and I work with a lot of people, which makes me look more productive than I am. I enjoy the human aspect of my job.” Students steered Ray toward invasive species, which happen purposely and accidentally. “Some threaten food for cattle, while others kill native species we want to preserve. It’s not getting better.” Primarily a researcher, Ray loves teaching and welcomes students at all levels to his lab. “My undergraduate research at Westmont made me think it’s a great thing for students,” he says.

One of the few Regents Professors at UM, Ray was nominated for a MacArthur genius grant in 2012. Thomson Reuters has recognized him as a Highly Cited Scientist and one of the World’s Most Influential Scientific Minds. He manages a five-year, $25 million research grant in environmental science for the entire Montana University System.