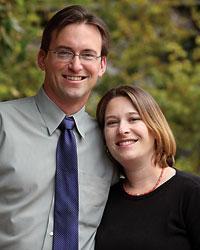 Rachel Wilson Trautwein ’96 came to Westmont knowing she wanted to be a doctor, majored in biology, and went to Loma Linda Medical School after graduating. Her husband, Eric Trautwein ’94, took a less direct route. A philosophy major who transferred from UC Berkeley, he planned on an academic career. But after working on a master’s degree in theology at Fuller Theological Seminary, Eric changed his mind. “I’m not sure how I ended up in medicine,” he says. “But I wanted to do something more hands-on.”

He took chemistry, biology and other prerequisites at Pasadena City College and applied to Loma Linda when Rachel did. They married in 1996, started classes together the next year and graduated in 2001. Today Rachel specializes in family medicine and works part-time for Sansum Medical Clinic in Santa Barbara, and Eric is an internist in private practice. They have two young children.

“I like being a doctor, although it’s a tough job,” Eric says. “But I get to spend time with people in a way few of us ever get to experience.”

Rachel appreciates the physical and emotional challenges she faces as a physician. “The decisions you make have a significant impact on people’s lives,” she says. “You are privy to the sad things that happen to your patients, and it’s satisfying to connect with them and help them improve their health.”

Eric didn’t take school very seriously until he came to Westmont. “I was surprised — and not always pleasantly — when I discovered how rigorous it was,” he says. “The professors expected a lot from me, and it’s hard to coast like I did at Berkeley when there aren’t a lot of students in your classes.”

Like many patients, the two doctors are frustrated by the unresolved issues surrounding health insurance in the United States. “It’s extremely complex, and there are no easy answers,” Rachel says.

“In the last six years, it has become difficult to be thorough because our time is so regimented and compressed by insurers,” Eric says. “It’s expensive to provide good care. With new technology and medication, expenses will keep increasing, and that is an ongoing challenge. I think it’s naive to believe we can solve the health insurance problem. We’ll be working on it forever.”

The couple thinks the amount of medical information available on the Internet has changed the practice of medicine. “Patients are more likely to do their own research and question their doctors,” Rachel says.

“It’s a mixed bag,” Eric says. “It’s good that patients take an interest in their health, but it’s not great that the pharmaceutical industry may be the source of their information. Some people come in and ask for a drug by name. They aren’t always open to hearing that changes in their lifestyle, such as a better diet or more exercise, may be more effective.”

The Trautweins believe their faith affects how they approach their patients. “I think being a good doctor means loving your patients,” Eric says. “Having compassion and loving one another is what Christians do and what we practice in our profession as well as our lives,” Rachel adds.

In fact, they think establishing a good relationship with patients is the most important thing they can do.“Ultimately, patients make the decisions about treatment,” says Rachel. “Our job is to help them make well-informed ones.”