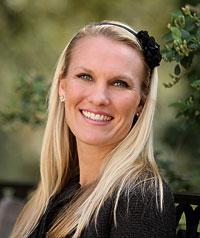 An NAIA All-American marathoner, Amy Bergenske Alzina ’98 knows what it takes to finish the punishing race: training, determination and hard work. Just three months after the birth of her first child she qualified for the 2008 Boston Marathon.

First as a teacher and then as a principal, Amy has faced a different but no less difficult challenge: improving public education. She has already turned around one troubled school and has taken her creativity and effective leadership to a second campus.

Her mother, a special education teacher who is also a runner, inspired Amy to become an educator at a young age. In high school, she worked in a first-grade class her senior year. At Westmont she majored in liberal studies, minored in kinesiology and competed with the cross country and track and field teams. After graduating, she earned a teaching credential as well as master of education degrees in teaching and administration.

Amy started her career at Santa Barbara Community Academy in 1999 teaching physical education. Students apply to attend this school, which requires uniforms and follows a core-knowledge curriculum. After two years, she moved inside to the classroom and spent five years teaching three different grades before becoming the principal.

The academy, a Title I school with a large population of non-English-speaking students, was struggling with a low Academic Performance Index (API). In three years, Amy brought it up 100 points to 815, and the academy qualified as a California Distinguished School. “The core-knowledge curriculum is rich in content and especially good for English-language learners,” Amy says. “It provides a framework that tells teachers what to teach, not how to teach.”

In July 2009, Amy became the principal at Adams Elementary School, a larger Title I school with 510 students. Focusing on academics, she has managed to continue threatened programs such as art and music. “I believe in educating the whole child,” she says. “The test scores will follow.”

To provide a well-rounded curriculum, Amy enlists support from the local community. Title I funds, grants from local foundations and support from the PTA allow her to offer enrichment programs before and after school that teach music, art, fitness and computer skills. The Monroe Foundation funds a Westmont student who coordinates volunteers.

“I see myself as an educational entrepreneur who seeks broad support for my school,” she says. To create a vegetable garden on campus, she applied for a grant from a foundation, enlisted volunteers from a Rotary Club and involved parents. “Schools need lots of help from the community to succeed,” she says.

Amy gets support at home from her husband, Jim Alzina ’98, a realtor with Sotheby’s. They have two young children, ages 4 and 2.

One of Amy’s goals is encouraging her students to consider college. She invited Westmont Executive Vice President Cliff Lundberg to speak on campus, and he brought Westmont T-shirts for all the fifth and sixth graders. Every Friday, students wear college shirts.

“Coach Russell Smelley encouraged me to do everything with integrity, and he believed I could do whatever I set out to achieve,” Amy says. “I’ve been blessed with great support in my life, and I want to provide that for my students at Adams.”