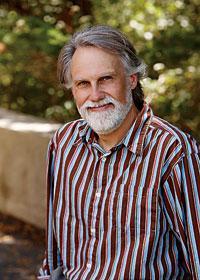 In November, The Santa Barbara Independent named John Blondell, professor of theater arts and artistic director of Lit Moon Theatre Company, a 2009 Local Hero. The publication described Blondell as a theatrical visionary. “In addition to producing innovative shows both in Santa Barbara and at theater festivals around the world, Lit Moon has become the sponsor of a series of Shakespeare and world theater festivals, thereby bringing to Santa Barbara outstanding examples of physical theater from places as far afield as Belgium, Prague, Finland and Macedonia.”

Blondell, who has been teaching at Westmont since 1991, has brought an international perspective to theater, and Lit Moon has enriched theatrical offerings with cutting-edge, avant-garde performances. His World Shakespeare Festival in Santa Barbara is the first of its kind in the nation and one of only seven in the world.

His directing work has been seen in Bulgaria, Scotland, Canada, Poland, Czech Republic, Montenegro, and Macedonia. Blondell earned a doctorate in dramatic art from UC Santa Barbara. He has received six Independent Theatre Awards, a 1994 Robby Award and the 2003 Faculty Research Award from Westmont.