The Westmont community mourns the death of a young professor committed to doing research and mentoring students. 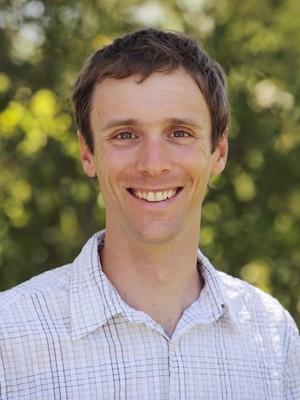 Alex Moore, who joined the Westmont faculty in 2011 as assistant professor of kinesiology, died May 9 from complications following surgery for Crohn’s disease. He was 31. His wife, Kirsten McKnight Moore, survives him; the couple met at Westmont in 2005 when she became the college’s head women’s basketball coach. They married in 2008, and their first child, Alexis Renee, was born June 29, 2012.

“The Westmont community has been devastated by the news, and we lift our thoughts and prayers for Alex, Kirsten and their families,” saysPresident Gayle D. Beebe. “Alex was a bright light—he had a winsome humility. He played a unique and distinct role in our kinesiology department and was one reason the major is so highly regarded.”

“His love for knowledge, athletics and, most of all, his personal faith gave him an exceptional ability to contribute,” says Glenn Town, chair of the kinesiology department. “He was a bridge builder, seeking to bring people and projects together without pushing his own agenda. His engaging personality made it a delight for faculty and students to interact with him daily.

“Alex loved teaching and being a mentor. He had a gift for making complicated concepts understandable and a passion for bringing students into his line of research. He welcomed that responsibility and couldn’t wait to get started. He was at the threshold of providing our department what we need in our next step: hands-on research. He was highly respected in micro-vascular research, already being asked to contribute to the field at a young age.

“I shared with Alex a love for cycling and had the privilege of serving as his cross country coach when he was an under­graduate student at Wheaton,” Town adds. “For two consecutive years, Alex was team captain and voted by his teammates “Most Respected.”

Known as a fierce competitor, Moore sought out challenges and did the work necessary to succeed. The text in his memorial program noted, “He thrived in the competitive arena as a leader and relished creating strategies that would lead to the entire team’s success. Teamwork, strategy and his competitive spirit led him perfectly into the world of cycling. He dove in whole­heartedly and molded himself into an impressive cyclist, which included a life-shaping stint on a U.S. developmental team competing in Belgium.”

Family members describe him as someone who “always considered family home. He cherished time with them, celebrating holidays, playing cards late into the night, and the yearly hunting weekend with the guys on his grandfather’s farm.”

Moore, a Wheaton College alumnus, earned a master’s degree in exercise physiology at the University of North Carolina at Chapel Hill. He worked at Westmont as an adjunct instructor for the kinesiology and biology departments from 2004-06, teaching Fit for Life and classes in anatomy, tennis, physiology and biochemistry. In 2006, Moore accepted a fellowship to study at the University of Missouri, which offers one of the best microcirculatory programs in the country. He earned a doctorate in biomedical sciences there.

Moore returned to Westmont in fall 2010 as a sabbatical replacement in the biology department, teaching physiology, genetics and cell biology. He began the tenure-track position in fall 2011 in the kinesiology department, teaching physiology, biomechanics and a research course. His research specialized in microcirculation, focusing on hair-sized arteries and the regulation of blood flow to tissue.

His memorial program concluded, “Alex was uniquely talented, committed, hard working, strategic and competitive. Yet at the foundation of all this was a heart that loved generously and cared deeply about others. Following the example of his Lord Jesus, he sacrificed for his family and friends and protected those he loved, in particular his wife, Kirsten, and the new life they are bringing into the world.”