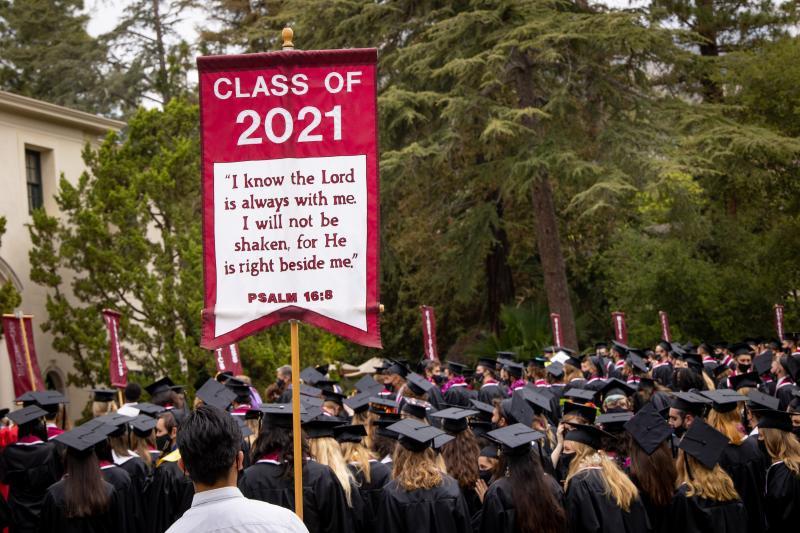 “No class in the history of Westmont College has endured so much to make it to this day,” said President Gayle D. Beebe as he welcomed the 306 members of the class of 2021 and their families on May 8 to a special, socially distanced Commencement service on Thorrington Field. “Four years ago, you arrived on a beautiful August afternoon, ready to move in, anticipating all that lay ahead, not thinking of the long and arduous journey that would bring you to this moment. Today, we celebrate all that you’ve achieved, all that you’ve learned — your academic, emotional, social, but also spiritual and enduring achievements — that will live on in your life long after today and will prepare you for all that lies ahead.” 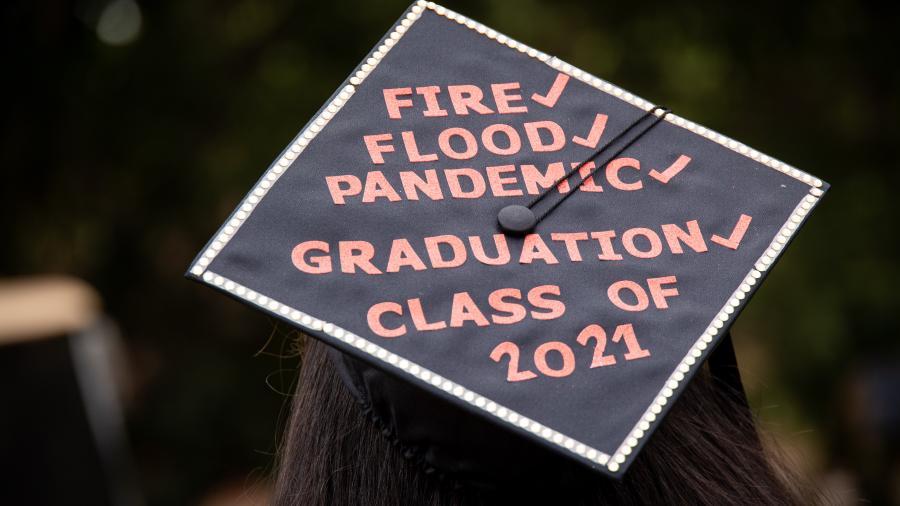 Four months into their first semester, smoke from the Thomas Fire — and its relentless movement toward Montecito — forced the college to evacuate in December. A few weeks later, after students had returned for the spring semester, deadly mudflows struck the region in January after a once-in-200-years storm hit the Montecito mountains. Although untouched by the fires and mudslides, Westmont had to evacuate again due to widespread damage that compromised the water supply on campus. Then, halfway through the spring semester of their junior year, students left again when the pandemic shut down campus–and nearly everything in the world. Despite the setback, students returned to campus in September 2020 for their senior year, living safely on campus and participating in classes on Zoom or outside under large tents.

In the Commencement address, Sandra Richter, Robert H. Gundry professor of biblical studies, said when she thinks of the class of 2021, she can’t help but hear echoes of James Taylor’s immortal lyrics: “I’ve seen fire, and I’ve seen rain. I’ve seen sunny days that I thought would never end.” “What is the deal with you people?” she asked. “As I told my classes more than once, we need to get you off campus before the 10th plague hits.” 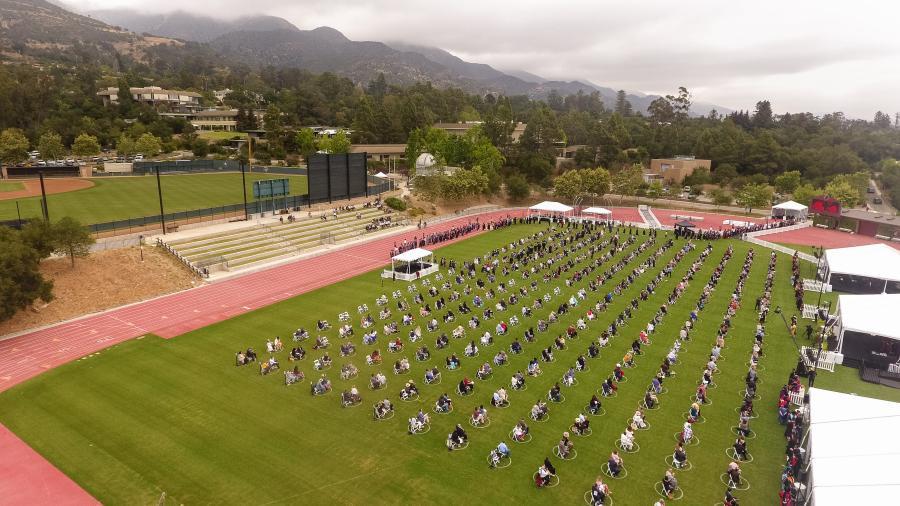 In her talk, “When You Cross the Jordan: Some Thoughts on Liminal Space,” she told the graduates that they’ve passed through the threshold we call college. “You have been gifted with so many precious big and small moments that have populated your liminal space here at Westmont,” she said. “These will be your treasured possessions for the rest of your days. Like the Israelites, you will look back to this simpler time with (mostly) warm nostalgic memories ... learning to love your God with all your heart and your mind.”

Caylie Cox, who graduated with a degree in English, says the last four years have taught her what it means to develop resilience and grit. “My class and I can claim one achievement: We’ve kept going,” she says. “Even when the world was literally falling apart around us, we’ve stuck together. We’ve built friendships, kept each other safe and embraced new ideas. I’ve seen my classmates grow mentally, emotionally and spiritually even in the midst of incredibly challenging times of life and death all around us. I couldn't be prouder of my class. We are, without a doubt, resilient.”

Some Westmont staff and faculty refer to this class as the mighty 300 Warriors. Of the 306 students who participated in Commencement, 124 earned honors. The graduating class included two veterans who served in the military before attending Westmont: Esteban Garcia Mares and Steven Carmona.

In their first large, public performance in person this year, the Chamber Singers and Westmont Orchestra provided music: a prelude, march tunes, accompaniment for the hymns and an anthem.

Beebe presented the Westmont Medal to Ron Werft, president and CEO of Cottage Health, Westmont’s partner for its new Accelerated Bachelor of Science in Nursing program that launches in spring 2022 pending approval from the California Board of Registered Nursing. The medal honors people who provide exceptional leadership in the Santa Barbara community.

“Westmont and Cottage have so much in common, from a commitment to our mission to a culture of respect and to common core values that include excellence, integrity and compassion,” Werft said. 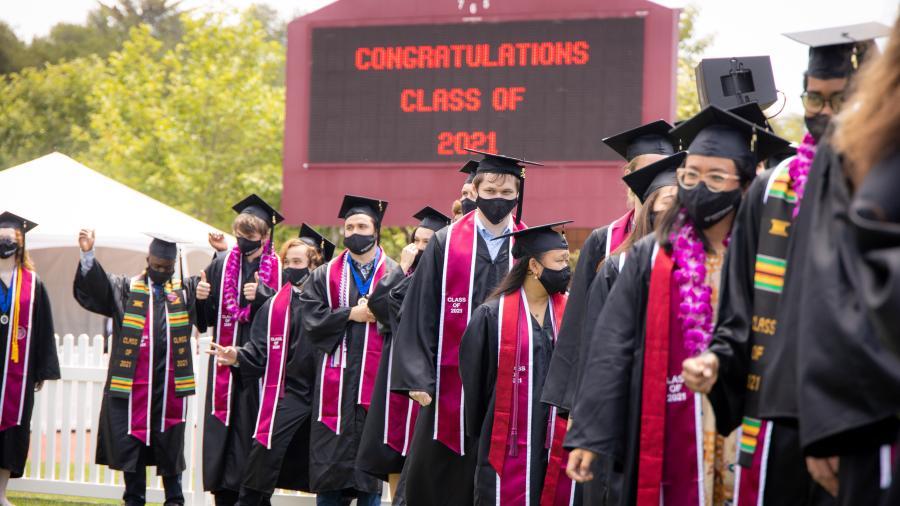 “Any student who is graduating from Westmont with this class has experienced an extraordinary number of natural and pandemic-related circumstances,” said Edee Schulze, Westmont vice president for student life. “Making it to this point testifies to their grit and resilience. For those who’ve had an unusually difficult time and battled to get to the finish line, we applaud your perseverance and courage.”

Last September, Jason Tavarez, director of institutional resilience, oversaw efforts that allowed Westmont to become one of the few schools in California to safely offer outdoor classes in person. Westmont has administered more than 8,900 COVID-19 tests, which resulted in a staggeringly low 1.1 percent positivity rate.

“The class of 2021’s resilience equips them to handle pretty much any adversity,” Tavarez says. “They must be the most employable class in the country. If I were looking to hire graduates with a strong work ethic and resilient mindset, I’d seek out Westmont graduates. If fires, floods and a global pandemic can’t stop them, truly nothing will.”