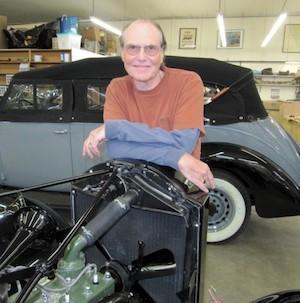 By day, Glenn Vaughn ’70 restores cars. By night, he restores lives. On weekends, he restores hope for the homeless and hungry.

For 17 years, Glenn has volunteered two nights a week as a counselor at Dirne Community Health Center. He went back to school to earn a master’s degree in counseling in 1988 while running a business; it took him 10 years to become a licensed counselor. He started working at the health center in Coeur d’Alene, Idaho, as an intern and never quit. “They haven’t been able to get rid of me,” he says. “I get to be my best self at the clinic and the soup kitchen.”

Several years ago, Glenn discovered Calvary Baptist Church in Spokane, Wash., the state’s oldest African-American congregation. “It’s the first church I’ve joined as an adult,” he says. “Like the Israelites, I wandered for 40 years before I found a home in an unlikely place.” He drives to Spokane on Saturday to serve meals to the homeless and worships there on Sunday.

“There is a mysterious connection between service and faith, at least for me,” Glenn says. “The soup kitchen serves humankind’s most basic need. Additionally, Christ makes it clear that we are to feed the hungry and clothe the naked.”

In 2011, Glenn received the Governor’s Brightest Star Award, which honors an individual in Montana for community service. Governor Butch Otter presented the award and praised Glenn’s work with Dirne Center.

Glenn came to Westmont for “good, solid Bible teaching” and majored in social science. “I got a great liberal arts education, but realized I needed to find a way to make a living,” he says. He considered joining Mission Aviation Fellowship and acquired the necessary ratings as a pilot and mechanic, serving briefly as a bush pilot in Alaska. “I decided flying wasn’t for me,” he said. He taught flying and ground school in Sitka before returning to Southern California to join his father’s business. Glenn grew up in a car family and restored vehicles with his dad, Ken, who joined race car driver Phil Hill in establishing Hill and Vaughn Restorations. Glenn worked with them for 10 years then moved to Idaho with his wife, Karen, to raise their three children there.

“I thought I’d never turn another wrench on another car as long as I lived,” he says. But he soon found himself in a car restoration business he still operates: Glenn Vaughn Restoration Services. He employs 10 people and keeps about 20 cars under restoration. “My name is associated with the well-known restoration business my father and Phil Hill ran,” he says. “I benefit from that.” He works on Packards from the 1930s but also does newer vehicles like classic Mustangs.

When he turned 40, Glenn decided to go back to school to get his counseling degree, which his wife encouraged. “I’ve always been interested in psychology,” he says. He sees about three people each evening, who pay $10 per hour. “It’s too sacred to take money for,” he says. “I approach counseling like a mechanic. I listen to people, help them take the bad parts out of their lives, throw them on the ground, and put in new ones. I love connecting with people—it’s so powerful to listen to another person. In a lot of my sessions, I don’t do much, but healing happens. I get my ego out of the way and let Christ do the healing.”

Glenn laughs when he’s asked what car he drives: a 1995 Subaru. “I don’t want to tie up money in a car when people I work with on Saturday live under bridges,” he says. “I’d rather make sure God’s work gets done.”