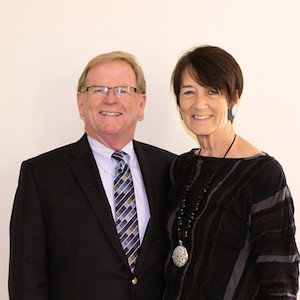 Unacquainted at Westmont, Karen Swadell Jobe ’70 and Jerry Van Leeuwen ’72 have joined forces at the California Center for the Arts in Escondido, Calif. “We came together for a common cause, and it’s like we’ve known each other for years,” Karen says. She chairs the board, and Jerry serves as executive director. They’ve established a stronger financial and organizational base for the center, which features a concert hall, a theater, an art museum, art and dance studios, and a conference center with meeting and banquet facilities.

“When you’re retired, there’s no shortage of things to do,” Karen says. She got involved with the center through a friend who thought Karen could build its educational program. The former superintendent for Valley Center-Pauma District northeast of San Diego, Karen spent 33 years as a teacher and administrator.

“I know how to work without money,” she says. “The city got tired of bailing out the center financially, which it did for 20 years. I was willing to be attached to something that was struggling.”

Jerry retired in 2012 after 26 years of directing community services for the city of Escondido. He also assumed responsibility for recreation, park maintenance and public works his last five years. Poor financial management at the center had frustrated Jerry for years, so he was well acquainted with the challenges the center’s board faced. They asked Jerry to serve as the executive director just a few months after he retired, and he accepted.

The two retirees provide valuable expertise as a volunteer and part-time employee. “We meet weekly and have a good time,” Jerry says. “I’m an administrator and get advice from arts professionals as needed—I should have paid more attention to those art classes at Westmont! A lot of my career has involved working collaboratively with other organizations, and I’m building relationships with local schools and arts associations so the center emerges as the convener of arts resources and education in Escondido. A leader needs to bring creativity and identify new strategies when resources are limited. I’ve had to suggest some controversial alternatives such as closing a library branch and cutting back on recreational programs. I’ve been helpful in sorting out the priorities.”

Jerry began by asking local people what they’d like the center to do. “Next year, we’ll put on our own series and find shows that are popular and successful,” he says. “We want to broaden the base for the arts here.”

“It’s tiring working in the public sector where more and more is demanded with less money, but this is exhilarating,” Karen says. “It’s about doing the right thing, the uncomfortable thing, but it’s been fun. We’ve reorganized and repurposed. Education has grown, and we’ve made greater inroads in school districts. We put on performances and provide a place where local people can perform. Some of the artists who come teach master classes in the local schools. We’re applying for more grants and using revenue from the conference center to support educational programs. Our predecessors placed the sod, and Jerry and I are putting down roots and getting them to grow. Thanks to good board members and wonderful people in the community, we’re moving forward.”

Karen and Jerry say their Westmont connection has enhanced their collaboration. “I felt at home at Westmont,” Karen says. “It was a safe place to explore ideas, experiences and relationships and an opportunity to grow and learn.” She majored in English and earned a teaching credential. Her husband, Tim Jobe ’71, continues to work as an independent financial adviser. Jerry majored in psychology and human relations. “It was a much richer and deeper experience than I realized when I was there,” he says. He earned a master’s degree in school administration at UC Riverside and directed a guidance program for troubled teenagers for the city of Chino for 13 years before moving to Escondido. “I never saw myself going into municipal government, but God’s hand put me in positions with the city. It’s been rewarding and a blessed experience.”