When Barb and I came to Westmont and Santa Barbara in 1994, our hope and prayer was that it would be a place where we and our three daughters could flourish. We haven’t been disappointed. The college and the surrounding community have been extraordinary gifts of grace beyond anything we could have imagined or anticipated. Our combined nearly 50 years of service to Westmont brought many long days and nights and plenty of challenges, but the rewards have been innumerable. For me as a professor, I especially cherish all those times when in a classroom or in my office or in a far-away European city, I saw a student (or two or three) awakened to some goodness or beauty or truth, the very things, I would say, which constitute the kingdom of God. Those are serendipitous moments that allow a teacher to keep believing that what you do matters. But over the years I came to see them as more than that; they are in fact holy moments, instances when we experience a heightened awareness of God’s loving presence and a deeper realization of who we’re intended to be as
the people of God. I am eternally grateful that thanks to Westmont students and colleagues, those moments broke into my reality frequently.

One of the great privileges Westmont afforded us was the opportunity to co-lead six Europe Semester programs between 1996 and 2017. Experiencing one time so much of the richness of Europe’s past and present, but also its brokenness, would have been amazing. To have done it six times leaves us wondering how we could possibly have been so fortunate. Yet as wonderful as Europe is in and of itself, the real treasure of those semesters abroad were the bonds of friendship forged with and between students. Those relationships, whether temporary or long-term, were critical to opening students to being transformed intellectually, socially, emotionally, and spiritually. Some of their growth was evident by the time we returned to the United States in December; much of it came to fruition in the years and decades that followed.

Serving as the college’s interim provost between 2009 and 2012 was another unexpected privilege. Among the myriad tasks that position entails, hiring new faculty may be the most important. As I look back on those that I helped bring to Westmont, I am delighted that so many of them have already emerged as leaders on the faculty, outstanding in their teaching, scholarship and service. I can say the same thing about my four terrific c colleagues in history, each of whom joined the department after me. If I am remembered as having played some small role in maintaining and enhancing the quality of faculty at Westmont, that will be a very satisfying legacy.

I suppose I would also like to be remembered for sparking a greater interest in and deeper appreciation for our own nation’s history within several generations of students. Heaven knows that my efforts towards those ends repeatedly failed. To those alums I can only say I wish I could have served you better. Americans in the 21st century surely need a deeper grasp of our national experience, one that both lifts our spirits and breaks our hearts.

As for the future, we look forward to remaining in Santa Barbara. When we moved here, we joked that we hoped to nd friends with whom we could grow old. Through God’s goodness, that indeed has happened. We have also been blessed with three precious grandchildren and spending more time with them and our adult children is high on our list of priorities. When the pandemic subsides, I will continue my work as a historian, fulfill some of our travel urges, and nd more ways to stay connected to Westmont students.

Due to the global pandemic, the college was unable to hold a retirement dinner for Rick Pointer, though at the end of the semester, several faculty members held a socially distant, outdoor tribute, reading jokes and praises for him from the Pointer’s front yard and sidewalk. 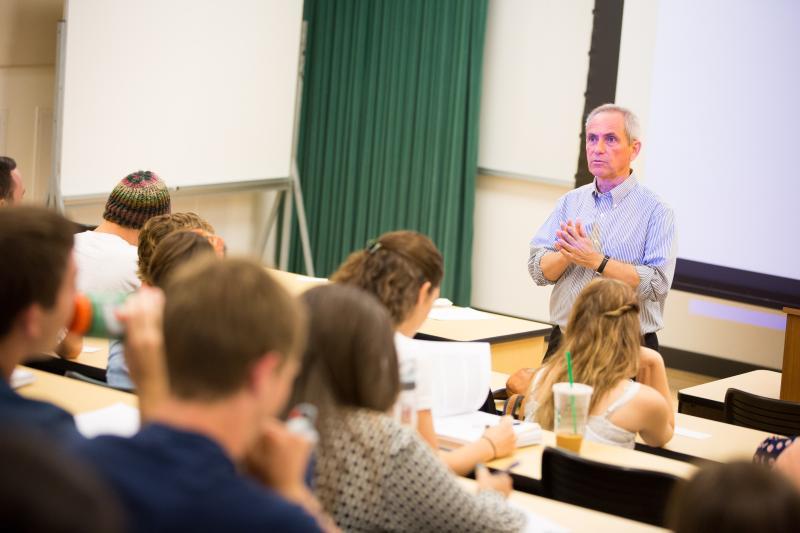 “I admire Rick’s intense loyalty. He’s tenaciously faithful in his commitments to God, church, college, family, friends, and history. I know he’s willing to suffer for his loyalty because he’s a lifelong Mets fan. Rick also shows genuine appreciation for what others have taught him—about how to notice what’s beautiful, for example, or the importance of being counted among the just and merciful. You are already missed, Rick!” Greg Spencer, professor of communication studies

“Rick has been an inspiration to me ever since I came to Westmont. To me, he is the form of a Westmont faculty member--the ideal type to which most of us can only aspire. He is a beloved and effective teacher, a faithful and productive historian, and someone whose service to the institution was earnest and humble. He has left big shoes to fill, and it’s unlikely that anyone will come along with the remarkable pair of feet that Rick had.” Alister Chapman, professor of history

“Rick was an inspiration to students and faculty alike. He consistently engaged thoughtfully and energetically with his students, his scholarship, and his service to the college. He exemplifies faithfulness.” Heather Keaney, associate professor of history

“Rick has a servant’s heart. He’s taken on a number of service roles at both Westmont and Montecito Covenant Church. Some of these roles have involved extended administrative responsibilities and others have consisted in behind-the-scenes volunteer work. Rick cares deeply about his students. He’s devoted to their wellbeing both in and out of the classroom. And he’s kept up with many of them for years after they graduated. Rick is also a dedicated scholar who’s made a valuable contribution to our understanding of Native Americans. Most importantly, he’s a dear friend of mine with whom I’ve experienced many a treasured moment.” Jim Taylor, professor of philosophy

“Rick Pointer demonstrated a rare excellence in many areas. His most recent Paul C. Wilt Phi Kappa Phi Lecture gave a captivating insight into both his teaching and research as he expounded on ideas in his recently-published book, “Paci st Prophet: Papunkank and the Quest for Peace in Early America.” Additionally,I was privileged to be in a mutual mentoring group with him in which his administrative skills kept us all on track. I only wish he could serve on our faculty longer, which would facilitate the opportunity for us all to learn more from him.”
Russ Howell, professor of mathematics

“Rick has been an exemplary colleague to work with over many years. I came to Westmont fresh out of grad school. Whenever I wanted to know what it meant to be committed to the life of the department and college, I just watched Rick in action. He also has a great sense of humor, despite having a serious face and demeanor. He often cracks me up
by busting out a funny comment when it seems like he’s being totally serious. Over the years, he has brought warmth, humor and collegiality to our department, which we have appreciated immensely.” Chandra Mallampalli, professor of history

“My favorite “images” of Rick are of him dancing on stage at Spring Sing - first as a fried egg, and then as Adam to Barb’s Eve. These are funny images, but also revealing. Rick’s deep love for students manifests in sometimes hilarious but always meaningful encounters with those he teaches. He is
a serious and careful scholar, a wise and caring mentor, and an eloquent example of the Christian Liberal Arts. He will be missed.” Deborah Dunn, professor of communication studies

“Rick has left his mark on my life by his encouragement, respect, and ever gracious probing as a colleague; but even more so by what I’ve heard from cohorts of students who’ve been included in the embrace of the Pointer home and family. To witness him and Barb build the community we all seek has been both inspiring and humbling.” Jeff Schloss, professor of biology

“Rick, I’ve been grateful to you on many levels and inspired by your scholarly example and productivity. Your latest
book models how historians can do the hard but vital ethical work of seeking out primary materials to tell the story of a
man of honor and person of color who might have otherwise been neglected. My son bene ted significantly from your teaching and counsel, and his time in the history department was one of his best college experiences. Accomplishments in global education have drawn upon the trendsetting you and Barb did in leading so many Europe Semesters. And I was grateful for your encouraging words and good counsel when I was considering whether or not to take the provost’s job.” Mark Sargent, outgoing provost

“Perhaps being born and raised in a Christian family in Brooklyn gives you the gritty toughness and kindness I appreciate about you. You’re diligent, long-suffering, and willing to endure personal, emotional and physical setbacks to serve purposes greater than yourself. Your public presentations and writing are elegant, insightful and penetrating.

You’ve never shied away from stating your opinion and perspective, but you’ve been quick to ensure everyone else could share theirs as well. Your willingness to step out of your Fletcher Jones Foundation endowed chair to serve nearly three years as interim provost carries with it a debt of gratitude I can never repay.

You’re an exemplary professor and teacher who has made an impact in the classroom matched by your service to the wider college community, a great and lasting legacy. You have served Westmont well.”
Gayle D Beebe, president

Why We Loved Him

Well, Rick, you're history.
But not quite. Because, like Rudolph, you'll go down for something good and live in a song that won't go away.

It won't be your red nose that we remember— because you don't have one of those—
but the way, just so, you guided us
through the evening fog. Or, most years,

the way you were hitched beside us in that fog. And who wouldn't want to be hitched
beside you? You saw farther
than most of us, had a certain steady tilt

to your antlers. When we had troubles, you told us they would soon be over— or, more likely, that we could endure. And we believed you, and endured.

What else is there? All this time
we thought we were delivering presents— but right beside us, you were the gift,
all along.