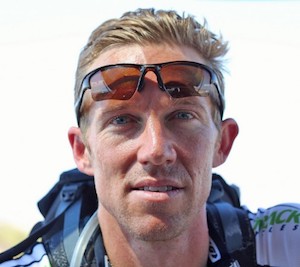 For six months, Deyl Kearin ’02 ran 50 to 60 miles a week along Santa Barbara beaches bearing a backpack. During the unusually hot summer, he set out in the heat of the day. He traveled to Death Valley once a month, training in 127-degree weather. “I learned what my body could handle,” he says.

His preparation paid off. In October, he completed the seven-day, 250-kilometer Sahara Race, running across the desert in temperatures that reached 120 degrees. On his back, he carried nearly all his supplies: food, bedding and clothing. Race officials distributed allotments of water at each checkpoint.

The first time Deyl heard about the African race, he wanted to enter. He’d only run one marathon in his life and hated the experience; he has devoted himself to surfing instead. But the Sahara Race inspired him to do something more than finish an extreme marathon. He decided to use the event to raise money for Opportunity International, an organization he has long supported. To date, he has received $38,000 and hopes to reach his goal of $50,000.

Helping the poor kept him motivated as he ran up and down dunes for five to six hours a day. On the third morning, he awoke with dysentery and couldn’t keep food or water in his system. That day he walked, struggling to keep moving; asking for medical care meant dropping out of the race. “It took me nine hours, and I had some dark moments,” he says. “I prayed a lot, and God helped me walk and not grow weary. I was able to eat a little food that night, and I felt recharged the next day. I kept thinking about Opportunity International clients who live in barren conditions and have to walk kilometers to get water. The race would end for me, but there is no end for them.”

When Deyl hobbled into camp each day, he read his email and updated his blog (www.run4poverty.org). “Lots of people prayed for me, and one day I received 75 messages,” he says. “That support carried me through. I went so far beyond myself, there was lots of room for God to show up.”

The first four days, he covered about a marathon a day. The fifth day the 150 competitors faced 55 miles. Deyl ran for 14 hours straight, relying on a headlight at night. “The pink flags that marked the course had glow sticks,” he says. “I had a lot of time for prayer. It felt like me and God on a camping trip.”

Deyl majored in communication studies at Westmont. “Classes like conflict resolution, rhetoric and public speaking should be required for everyone,” he says. “Those skills have served me tremendously.” Deyl stayed in Santa Barbara after graduating and worked for Invest West, a real estate company. In 2007, he formed Enduravest Partners with a friend. The business raises money from investors and buys distressed properties such as apartment buildings and houses, keeping some as rentals and selling others. The partners have hired a third employee, Bill Sharp ’12, and offer internships to Westmont students.

Deyl says he can’t wait to do something like the Sahara Race again, although it took time from his family. “As hard as it was, it was one of the best experiences of my life,” he says. “And I’m in the best shape of my life at 32.”