Westmont Magazine Serving as a Steward for Student Life

As a vice president, Edee Schulze seeks to steward her gifts, relationships, opportunities and vocation in a way that pleases God

Rather than follow a grand plan for her life, Edee Schulze has looked for the next opportunity to serve God. This openness led her to a future she’d never envisioned: a career in student life and positions as a college vice president. “I’m grateful for my experiences, and I feel a high level of responsibility to be a good steward of the opportunities God has given me,” she says. “It’s been a calling, I think, and a satisfying, engaging and motivating vocation.”

After graduating with a degree in kinesiology from Cal Poly Pomona and working at Christian camps during summer breaks, she served as a youth director at a large Southern California church for a year. Then she moved to Illinois to become a full-time, year-round camp director. 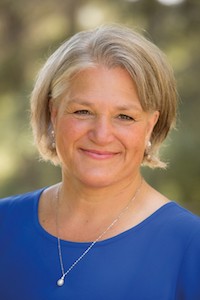 To meet people, she enrolled in a camping class at Wheaton College’s graduate school. “The material was interesting and influenced the way I thought about my life and work,” she says. She made friends there, kept taking classes and completed a master’s degree in educational minis-tries “predominantly because I needed a social life,” she says.

After five years at the camp, Edee took a job at Wheaton as a resident director. When the college created the position of director of residence life four years later, she moved into it. One of her staff members recommended a class at Loyola University in Chicago, and she realized that studying higher education could help her in her new job. Once again, she ended up completing a degree unexpectedly, this time a doctorate in higher education administration. “Attending graduate school was satisfying and helpful professionally as well as personally,” she says.

When one of the deans of students at Wheaton retired, Edee took advantage of another opportunity and served for 11 years as dean of student life at Wheaton. “I was in the right place at the right time,” she says. “It was God’s timing.” She then spent six years at Bethel University in Minnesota as vice president for student life before coming to Westmont.

During these years, Edee discovered her dominant gifts and strengths. “I have a curiosity about people and a desire to understand their stories,” she says. “I’m able to be focused and attentive and use the passion God has given me.”

She also recognized the value of a Christian liberal arts college. “I found the environment stimulating spiritually, emotionally and cognitively,” she says. “I didn’t have that kind of experience as an undergraduate.”

At both Wheaton and Bethel, Edee con-ducted qualitative research on gender dynamics and learned that small inequities may dissuade female students from pursu-ing careers that match their gifts and educa-tion. “If a female pre-med student is asked how she will be a doc-tor as well as a wife and a mother, it can have a chilling effect on her career choice,” Edee says. “It’s a good question, but it needs to get asked equally of men and women.”

Edee notes that technology is chang-ing how relationships develop.“With all the digital technology, I’m concerned that the breadth of relationships is greater than the depth,” she says. “Young people don’t necessarily learn how to connect face-to-face with others around the table. When individuals with underdeveloped relational capacities show up in a work place, they don’t have much practice in working well with colleagues and developing relationships.” She thinks a residential college like Westmont can teach these important skills.

“I have the opportunity to stand at a crossroads with students when they face challenges or when something has happened that needs attention,” she says. “I consider it an honor to work with them as they make decisions. I start with the basics and their well-being and ask, ‘Where are you right now, and what are the next things we need to do to get you to a better place?’ Students often want to do something different and end the behavior that led them to me.”