Westmont Magazine Serving Wycliffe and the Otomi People for 60 Years 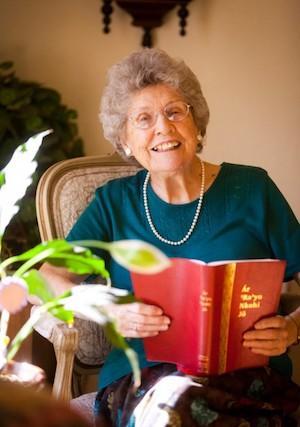 Nancy Lanier ’49 has devoted her life to living in Mexico and translating the New Testament into two Otomi dialects. Now 87, she uses email to oversee work on an Otomi Bible from her home in Tucson, Ariz.

“I didn’t know I was going to be a Bible translator when I attended Westmont,” she says.“But God knew, and he prepared me. I’m grateful for my Bible major.”

Nancy taught elementary school in Vallejo, Calif., for four years and took a course at Camp Wycliffe one summer after hearing about it from a Westmont friend. “The Lord led me to apply to Wycliffe Bible Translators, and I was accepted,” she says.

She joined Wycliffe in 1952 and settled in Mexico the next year, assigned to the Otomi indigenous group, which includes many thousands of people spread over several states. She began learning the language and working with translators, making her home in an Otomi village in the Mezquital Valley.

“We can’t do it without the native speakers,” she says.“They must do the translation.” Nancy helped compile an Otomi dictionary in 1956, and the people received the Otomi New Testament in 1971.

Nancy next worked on a translation in a different Otomi dialect spoken in Querétaro, and the people received this second Otomi New Testament in 2003.

“I thoroughly enjoyed my experiences,” she says.“The Otomi are hospitable, accepting people. I made many friends and still stay in contact with some of them.”

Although Nancy retired in 2003 after 50 years, she stays involved with Wycliffe and lives near the organization’s headquarters for Mexico. She travels less these days, but she still exercises and sings in the Vistoso Community Church choir.

In 1999, Nancy returned to campus for her 50th college reunion. She adopted advice from Iva Schatz in the gift planning office to invest an inheritance she received in gift annuities from Westmont. As a result, she became a member of the Wallace Emerson Society.“The annuities have been so helpful in providing income for me,” she says.“I’m so thankful to the Lord for leading me to Westmont and through Westmont to Wycliffe. I’m grateful to God for all the ways he has led and provided for me.”