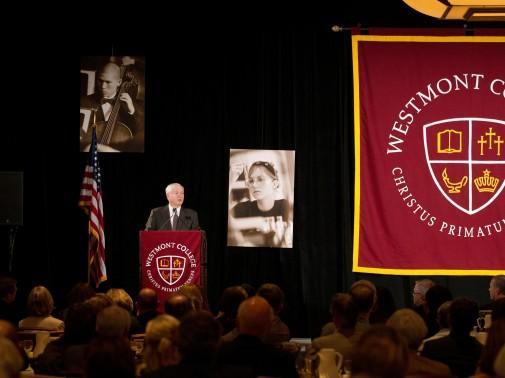 Robert Gates, who served as secretary of defense for two presidents of different parties, warned the audience at the Westmont President’s Breakfast March 2 that the political situation worldwide could grow more chaotic and dangerous, especially in the Middle East.At a time when the U.S. government needs wise leaders capable of confronting these challenges, Gates worried that politicians seem more focused on getting reelected and scoring ideological points. Citing the government’s inability to carry out its basic functions, he called for a return to compromise and bipartisanship, which he has practiced throughout years of public service. The only career officer in the Central Intelligence Agency to rise from entry-level employee to director, he has advised eight U.S. presidents on intelligence and defense policies.

A decade after 9/11, Gates says eliminating all risk from terrorism is as impossible as eliminating all crime.“Our defense, intelligence and various security and law enforcement agencies can dramatically reduce the risk and the magnitude of the threat,” he said.“However, to expect that government will be able to stop any and all kinds of future terrorist attacks is completely unrealistic, especially in a free and open country of over 300 million people.We can and we must pursue vigorous measures to manage and minimize this risk . . . but without sacrificing our rights, our privacy and our individual dignity.” 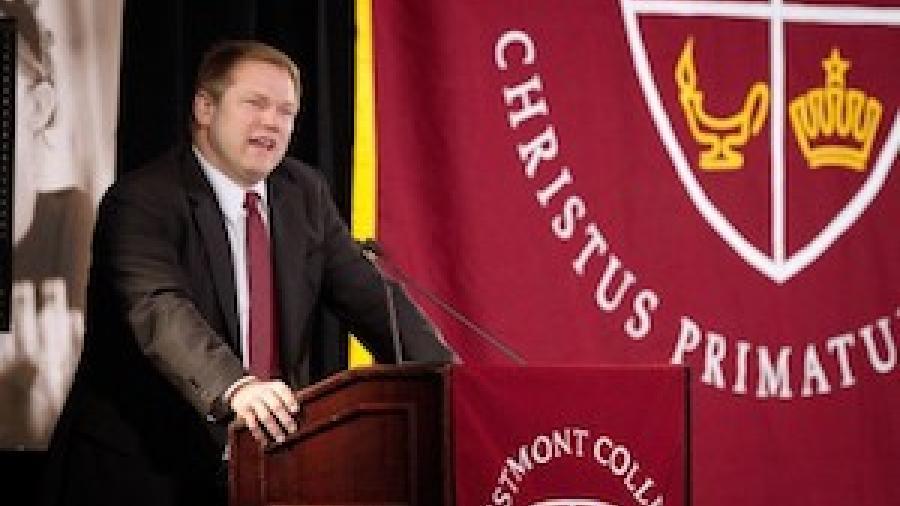 He said the U.S. needs to fight the enemy on their 10-yard line rather than our 10-yard line, or even worse, our goal line.

Noting that the Middle East would present more problems in the future than opportunities, Gates said he didn’t think outsiders could do much to influence the outcome. He also expressed opinions about some of the most volatile countries in the world.

Afghanistan:“A failure in Afghanistan would mean a Taliban takeover of much if not most ofthe country and likely a renewed civil war. Taliban-ruled areas would once again become a sanctuary for al-Qaida and a staging area for resurgent militant groups.”

Pakistan:“As much as it pains us to say it and to do it, we need the Pakistanis and have no other choice but to work with them…. The key going forward is to convince the Pakistanis that over time the Islamic militancy within their own borders, a movement symbiotic to the Taliban in Afghanistan, represents as much an existential threat to them as their old rival, India.”

Iraq:“Iraq’s future is up to the Iraqis. As messy as Iraq’s politics are though, ironically it is to date the only real Arab democracy. We can only hope that after all of our and their sacrifices they can keep it.” 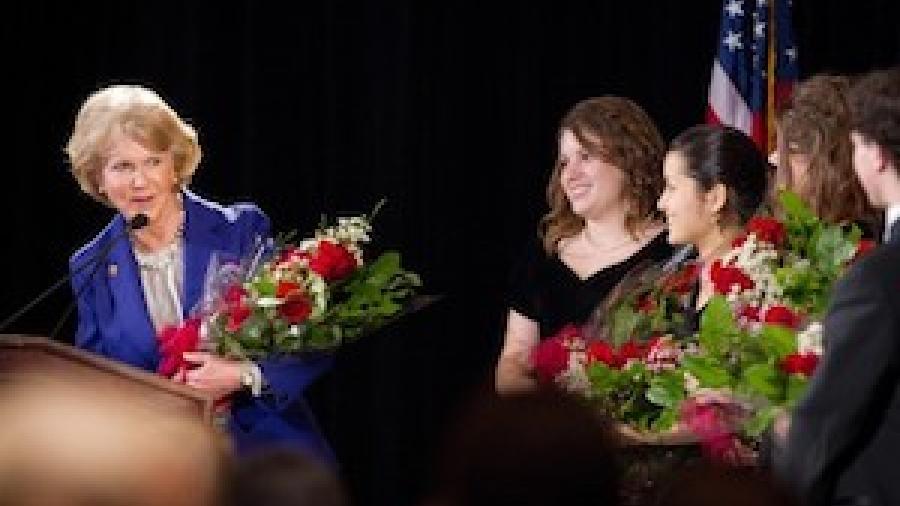 Iran:“The Iranian outburst over the Strait of Hormuz suggested the most recent set of sanctions imposed by the United Nations with American support and leadership are starting to bite. And that’s our best chance going forward, to ratchet up the economic pressure and diplomatic isolation to the point where the Iranian leadership concludes that it actually hurts Iran’s security to pursue nuclear weapons.”

Gates prefers sanctions over the two alternatives: attacking Iran or sitting by while the nation develops nuclear weapons. He described both as “catastrophes”; the first probably wouldn’t succeed due to the hidden and dispersed nature of Iranian nuclear facilities, and the second would ignite an arms race in the Middle East.

China:“There is no reason for the U.S. and China to be enemies. But if we treat China as an enemy, it will certainly become one.”

The key to a prosperous U.S. future is to fix America’s financial situation, sustain strong institutions of national defense and foreign policy and reclaim our confidence and credibility in the global stage. “(We need our) political class to show leadership and make decisions that may be unpopular in the short run but will strengthen the country for the long haul,” Gates said.“So far there appears to be little evidence that this has taken place. Indeed, as a result of several polarizing trends in American politics and culture, we have lost the ability to execute even the most basic functions of government, much less solve the most difficult and divisive problems facing the country.” 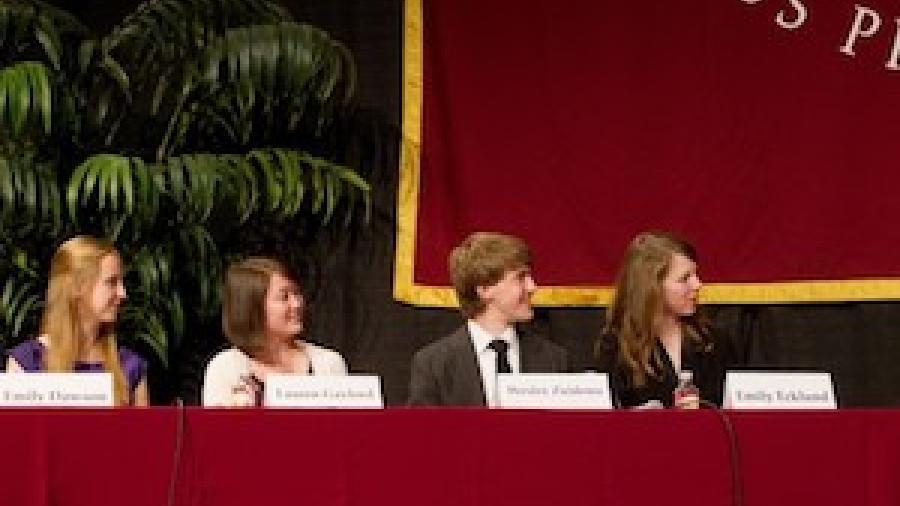 Gates cited several factors contributing to this failure: a need for redistricting, a lack of a consistent strategy from many presidents and congresses, and changes in the role of news media.“But much of the dysfunction comes down to an unwillingness to put aside short-term partisan gain and ideological purity for the long-term benefit of our country,” he said. He pointed to the Cold War as an example of a successful, sustained commitment that politicians of both parties continued through successive administrations.

Hundreds of cable channels, blogs and other electronic media have created a more democratic and open media that distribute even the most extreme points of view.“It seems the more vitriolic the opinion, the more attention it gets,” Gates said, which has “fueled the coarsening and dumbing down of our political dialogue.” He regrets that “compromise has become a dirty word, too often synonymous with a lack of principles or selling out.Yet our entire system of government has depended upon compromise.All of the founding fathers, whom we so rightly revere, created this country and our Constitution through compromise. Critical ideas and progress in our history often have come from thinkers and ideologues on both the left and the right. But the laws and the policies that ultimately implemented the best of those ideas have come from the vibrant political center as a result of compromise.”

Gates concluded by imploring the 750 people present to elect leaders willing to defend their interests.“Whether the United States sustains our global, economic, political, cultural and military preeminence depends not on the successes or failures of others, on what other countries do, but on what we choose to do, on the decisions we make and on the courage and determination and unity that we demonstrate.” 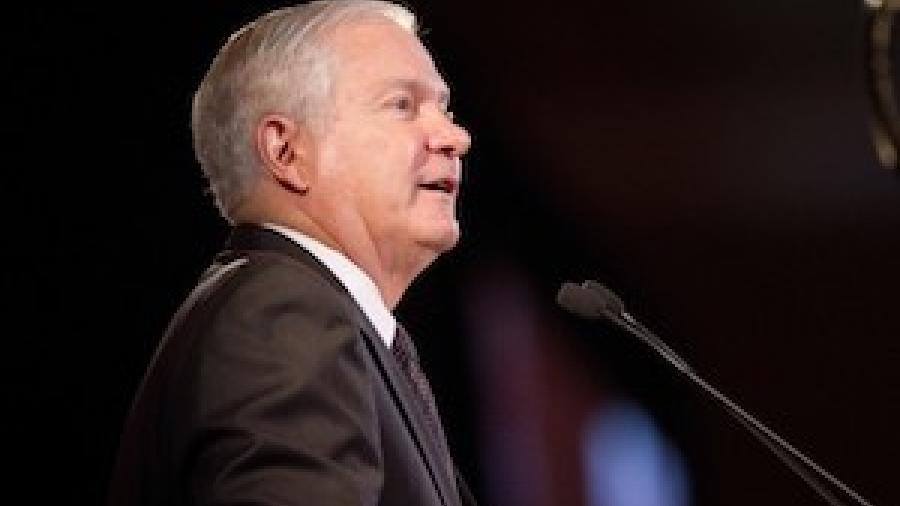 At the end of Gates’ speech, President Gayle D. Beebe (below, top left) invited seven members of the Westmont College Choir to bring Gerd Jordano, chair of the President’s Breakfast Steering Committee, seven dozen roses (below, bottom left).The Montecito resident, who has overseen the annual breakfast since it began seven years ago, is stepping down as head of the committee. The Westmont College Choir (below, top right) performed three pieces at the beginning of the event. The Westmont Foundation sponsors the breakfast.

For more information about Gates and the President’s Breakfast and to see more photos, go to: westmont.edu/presbreakfast.