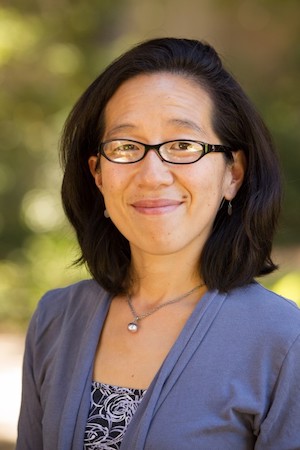 As a professor at Louisiana State University with large classes, Felicia looked for ways to connect with students. At Westmont, she seeks the time and energy to do research. “I’ve always seen myself as a hybrid academic who teaches and does research,” she says. “I’m interested in both activities and believe in the value of both.”

A sociologist with a doctorate from the University of Virginia, Felicia joined the faculty at LSU’s Manship School for Mass Communication to present a broader sociological framework to journalism students. Her research on virtual communities led to this appointment, and she enjoyed teaching there at a time when social media was dramatically changing journalism and the mass media industry.

Felicia had no experience with Christian schools before arriving at Westmont in 2013. “I always wondered about them and spent time thinking about the potential of Christian education,” she says. “A Christian college can do a lot of things, such as formulate a vision—the potential is great.”

After graduating from Yale, she spent time at L’Abri, where she first explored the life of the mind. “I discovered my faith was not just about personal piety and evangelism but that it informed how I thought about everything,” she says. “This was a new concept, and I realized I could approach all issues, even feminism, from a Christian perspective.”

“My experience at Westmont has been wonderful, but it’s been a steep learning curve,” she says. “It’s lovely to hear student conversations about their other classes and see them struggle with what their voice should be in society. They are so hungry to talk about hard issues such as gender, sexuality, race and inequality. They ask, ‘How should I be thinking about this? What are we supposed to do?’ They want to do something.” Felicia provides a framework for students to engage issues in meaningful ways. She encourages them to think about being an advocate for the homeless but also asks them to consider their calling. “Not everyone is called to be a homeless advocate,” she says. “I ask them, ‘What does fighting homelessness and inequality as a teacher or an engineer, etc., look like? I want them to see their potential and all t he areas where we need Christians, such as the media.”

Felicia writes for a broad audience, including the church, and appreciates Westmont’s support for such work. “I want to explore how social media shapes our ideas and experiences,” she says. “For example, texting has changed our relationship with the phone, with both benefits and losses. Embedded in texting is the idea that we don’t want to interrupt each other, and that shapes how we engage others. Technology changes our perceptions. Why do I feel unsafe or lost when I forget my phone? But we are more present without our phones, and we’re losing the sense of being present with people in the same room.”

Felicia was shocked to attend a conference of mommy bloggers and see attendees using laptops, tablets and phones while listening to presentations. “The people in the digital industry represent a radical shift with multitasking, but all the studies and research show it makes us less productive,” she says. “Why do we want to multitask? We’re driven, and the technology feeds that. How should the church address this issue and promote the importance of presence?”

A story in the New York Times about a professional conference for mommy bloggers inspired Felicia’s interest in these women. “The article denigrated them, questioning their status as professionals, and that bothered me,” she says. She began studying the subculture and discovered skilled, media-savvy women. “Many started blogging about parenting, but as their children grew, they moved on to topics such as politics, sports, cooking, crafting, race and sexuality. They are well-educated, and they are building companies and starting entrepreneurial organizations.” While most mommy bloggers are white, stay-at-home mothers who use their income for extras like vacation, the majority of women of color who blog also work full time. “In addition to attending general conferences, these women also hold their own events to build professional networks and find support,” she says. “They don’t see many people like themselves in the tech/computing world.”

Felicia is a mother herself. She and her husband, Ed, who teaches philosophy and political science at Westmont, have two children, a daughter, 11, and a son, 6.