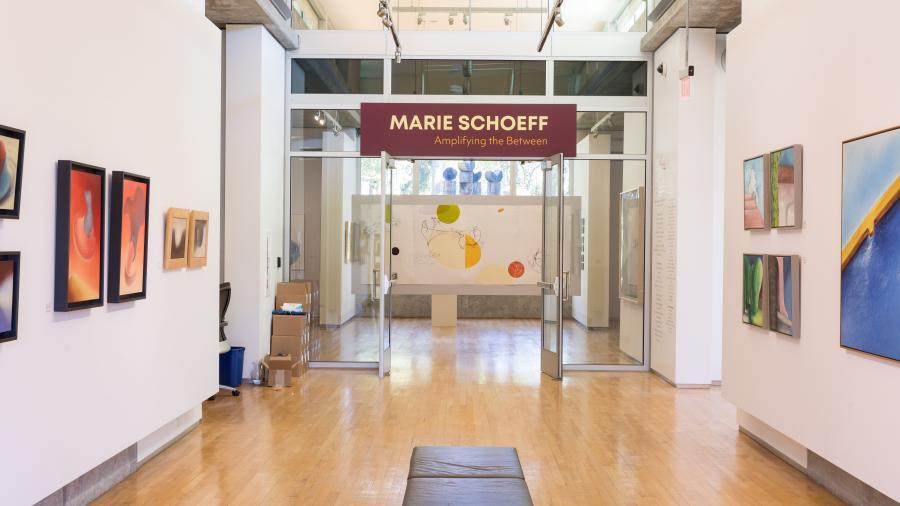 In her solo show at the Westmont Ridley-Tree Museum of Art (January 13 through March 26), Marie Schoeff explored the space between our daily lives and the more ethereal dimensions of our world. “Amplifying the Between” recalled the Celtic notion of “thin spaces” that “describe our sense of being when our experience of the divine and the temporal are knit together. It’s a special sense, one that I encounter in my process of making art,” she says.

Dane Goodman, Schoeff’s husband and a fellow artist, has supported the Westmont art department for decades and has also exhibited his work on campus. He has hosted numerous groups of students for studio visits and advised the art department on projects for the future growth of the arts in Santa Barbara. 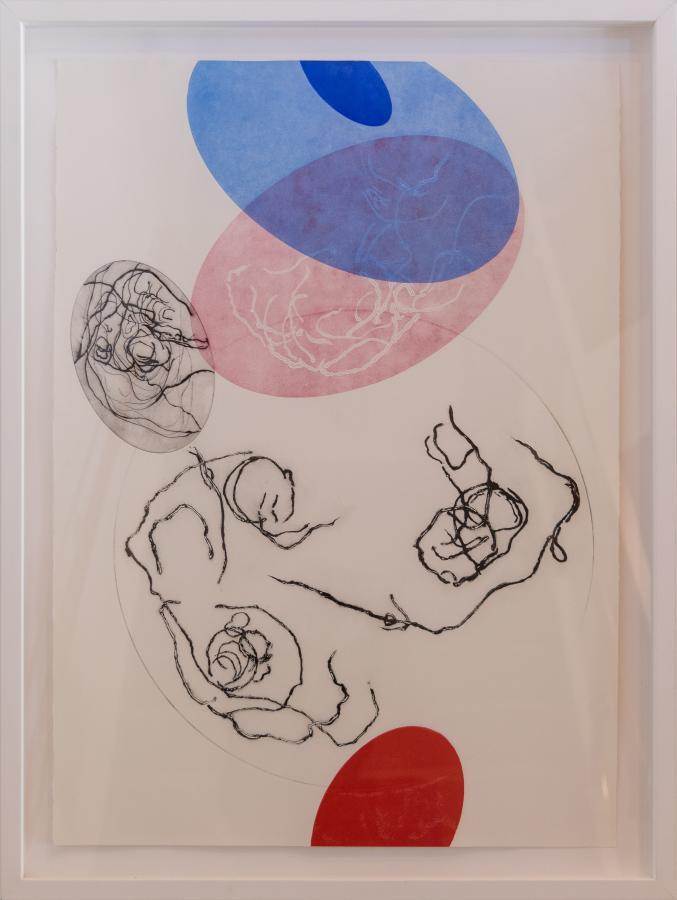 After living and working in Santa Barbara since 1983, Schoeff first connected directly with Westmont in 2003, when she taught drawing for the art department. In 2005, she oversaw a group of art students who created Stations of the Cross installed across campus. In the following years, she has taught, created art in the Adams classrooms and participated in museum programming. Now she has an exhibition to herself.

Schoeff’s imagery, rooted in drawing, explores the ethereal, a transcendent space in a spiritual realm. She believes that our sense of place on the globe creates a unique attachment to lines of latitude and longitude where we spend significant time. She studied art on both the Pacific and Atlantic coasts, giving her a dual identity. At its core, her work displays a profound yet unpretentious relationship with nature and spirituality.

“Amplifying the Between” consists of many large works of art that swirl with color and abstract lines and shapes. “My exhibition at the Westmont Ridley-Tree Museum of Art is an honor and delight,” Schoeff says. “It provides a view of 40 years of artwork curated throughout the galleries. This type of retrospective presentation is a unique opportunity for viewers to see relationships between artworks and understand the artist’s creative path over time. For me, as the artist, it’s a wonderful chance to reflect upon my career and stimulate my growth as an artist. Judy Larson (R. Anthony Askew professor of art history and director of the Westmont Ridley-Tree Museum of Art) and Christopher Rupp (curator and collections manager of the Westmont Ridley-Tree Museum of Art) understand the importance of these factors and worked hard to create an exhibition that provides a lively aesthetic experience for students and the Santa Barbara community at large.”

A QUARANTINE IN THE TENDER LAND

“You always feel like you’re living right on the knife’s edge with live performance,” says Christina Jensen ’09, who directed Westmont’s 2022 opera, “The Tender Land” by Aaron Copeland. “Live performance in COVID times is just an extra sharp knife.” One day before opening night January 28, two of the opera’s lead performers went into quarantine after exposure to COVID-19. Cast, crew and musicians agreed that the show must go on, and it did. An understudy took over for one actor, and Jensen added dramatic dialogue and re-lit the stage to cover the absence of the second. Other cast members memorized new lines and learned new dances a few hours before the show. “We all had to pick up some slack, in my case learning two waltzes Friday afternoon and performing them that night,” says Cade Petrie ’22, an ensemble member. “I did step on a few toes.” The two original actors left quarantine in time for the second and last performance January 30. 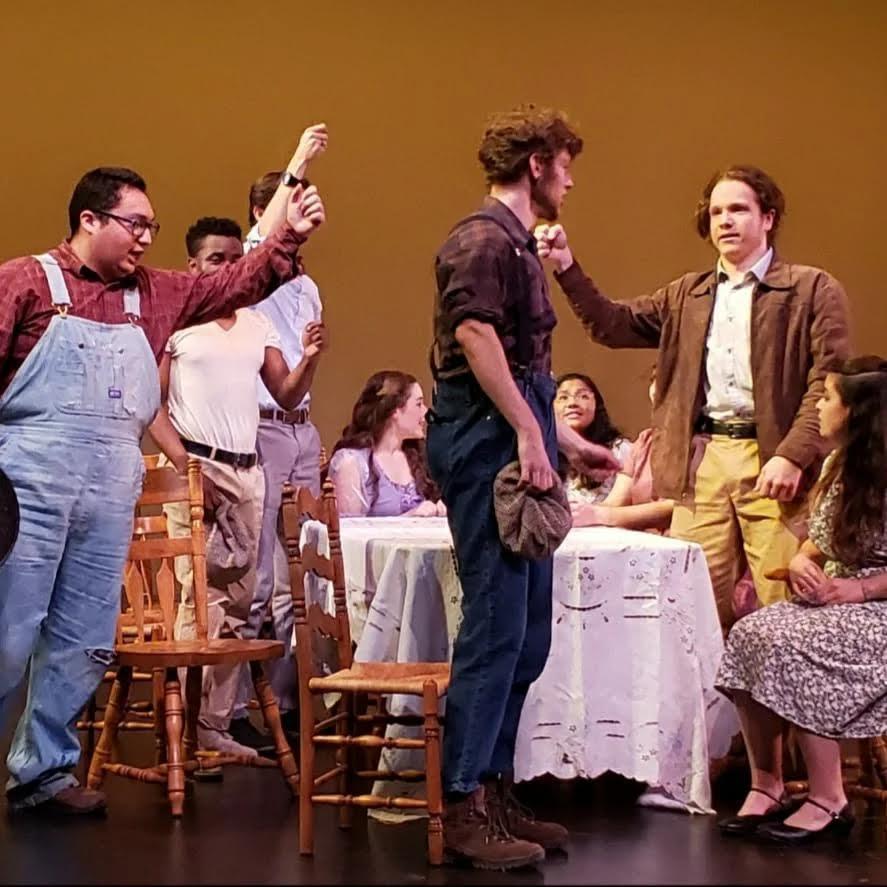 “The best part of conducting opera happens when everything comes together in performance, when the intensity of the storytelling, the rhythmic energy in the singers’ lines, the support of the orchestra, the impact of the lighting and the effectiveness of the staging all work in harmony,” says Michael Shasberger, Adams professor of music and worship. “Being in the middle of that as the conductor is a wonderful experience.” Shasberger served as the music director for this, his last Westmont opera, as he retires in May.

Artists of all kinds — conductors, directors, actors, musicians — came together to produce the opera. “This year,” we had College Choir folded into the large ensemble numbers as well as many student volunteers for crew positions,” Jensen says. “It took the entire community (faculty, staff, principals, ensemble, orchestra, and crew) to pull off this production.”

The artists draw inspiration from various places. Petrie says that great music motivates him. “When I’m trying to come up with ideas for my writing or for my own music or just finding the strength to get on with the day, it’s always music I go to. Some music from ‘The Tender Land’ I’ve practiced so much that I’ll probably catch myself singing it for years to come, and I get a little burst of joyous memory whenever I do.”

Jensen says that her faith, great literature and art influence her work as a director. “It amazes me how many stories revolve around redemption,” she says. “I take that knowledge and press into it with my staging and try to draw it out of my actors when working with them.” Through staging, she recreated several famous paintings of Romeo and Juliet at moments of emotion in the opera. The motifs from Shakespeare’s play also helped her emphasize the themes of love and loss in the opera.

Shasberger says that as a teacher, seeing students realize their potential inspires him. As an artist, he loves creating art of “great beauty and meaning.” As a musician, he says, “I’m compelled to create to share emotions, present ideas and tell truths we can’t fully express in written or spoken language. To hear it sung, or to hear the impact of the orchestra beneath the text, to see the intensity of the moment in the face of the actor; these are all part of the unique forms of expression that complete our humanity. All three of these are deeply linked to the gracious nature of God in giving us the ability to grow, the capacity to move others and this strange form of communication found in the arts. Therein is the greatest inspiration.”

CHOIRS PERFORM THE “CREDO” FROM BACH’S “MASS IN B MINOR” 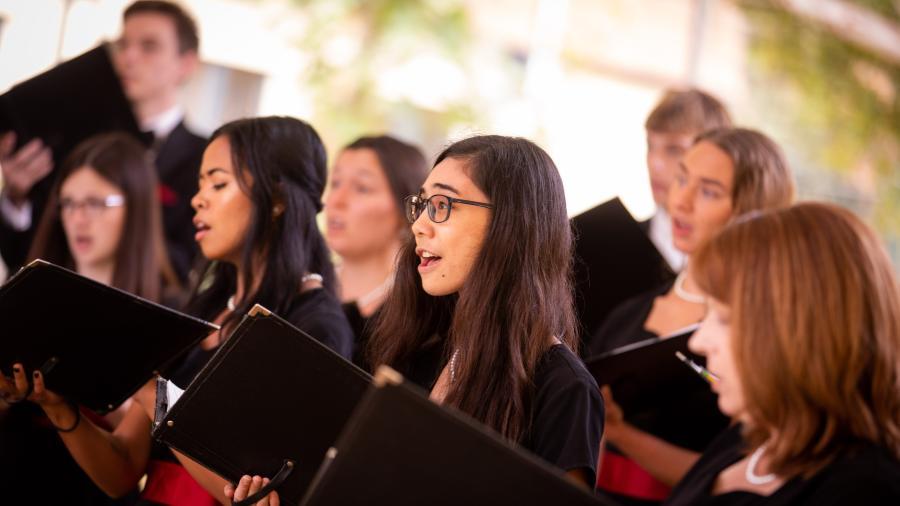 the “Credo” of Bach’s “Mass in B Minor.” “Toward the end of his life, yet still over the span of several years, J. S. Bach set the various sections of the Roman Catholic mass ordinary to music,” Gee says. “Scholars debate about his purpose for doing so — why would a staunch Lutheran set the Latin mass? Nonetheless, theologian Jaroslav Pelikan describes the work as affirming the ‘continuity of the historical church.’” 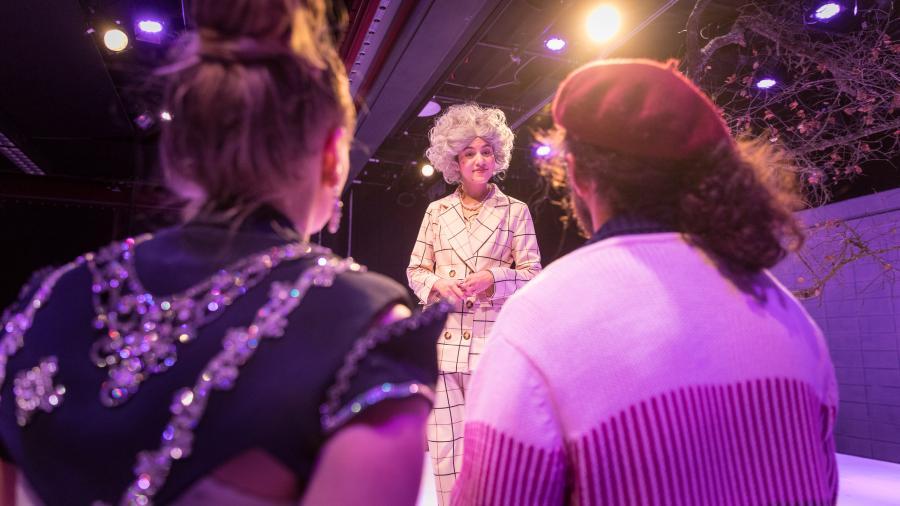 “Lovers want to get married, a parent wants to hoard wealth and obstruct those marriage plans and everyone schemes and plots and contrives to get what they think is best for them,” says John Blondell about the college’s production of “The Miser” at the end of February and beginning of March. Professor of theater arts and director of the production, Blondell believes those themes resonate in 2022 Santa Barbara just as they did in Paris in the 1660s. He also has a personal connection to the play: It was the first one he performed in as an undergraduate in 1978.

“Moliere’s plays are confections of marvelous artifice,” Blondell says. “This play, like all of Moliere’s, exposes characters pushed to play elaborate double- games to survive in a materialistic society. Love and money! How can we get them, and how can we get more? Everyone lies, everyone tricks, everyone deceives, and all for their own particular ends.”

Westmont’s performance will stand out from most productions of “The Miser” because it reverses the characters’ genders. The availability of actors influenced this decision, but Blondell says the gender-swap adds an entirely new dimension to the play. “The inversion causes an essential estrangement and a way to imagine, reflect and enjoy differently,” he says. “What results is a kind of social satire, which helps create a richly textured, multivariable comic universe that I hope will be as irresistible as it’s eye-opening. We’ve created an alternate, matriarchal universe where the conventions, stereotypes and relationships exist in much the same way as our culture but are simply inverted.” 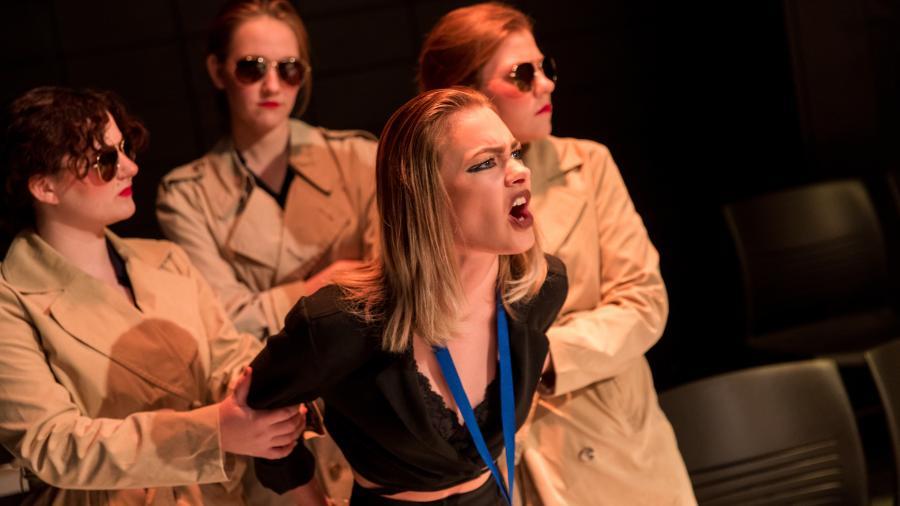 Known for his creative staging and introduction of contemporary elements in classic works, Blondell says that old plays inspire him. “As we engage with them directly, we ask questions about what they do, how they do it and how they connect to our lives and resonate today,” he says. His students encourage him through “their bravery, their soulfulness and their love for one another. I’m also inspired by the theater itself, by the art form, by the opportunity to tell stories in a shared communal space in real time. We can speak together of life and love and do it in ways that only the theater can: in the charged moment of now when we are all present, available and open to one another.

“In addition, this play is just plain great fun. It’s OK to have fun in the theater; in fact, in the theater’s quest to be relevant and serious and good for us, perhaps we’ve lost something of why it exists: to provide pleasure, to entertain, to invite us to laugh, to offer something for us to enjoy.”

Westmont’s Theatre Department hosted the 2022 Fringe Festival, “Unfamiliar Waters,” April 21–24. Students showcased their own work through small plays, poetry, monologues and dance performances at various locations around campus during the weekend. The annual production encourages students to think creatively about their productions and explore a variety of topics, sites and design.

ON THE ROAD AGAIN 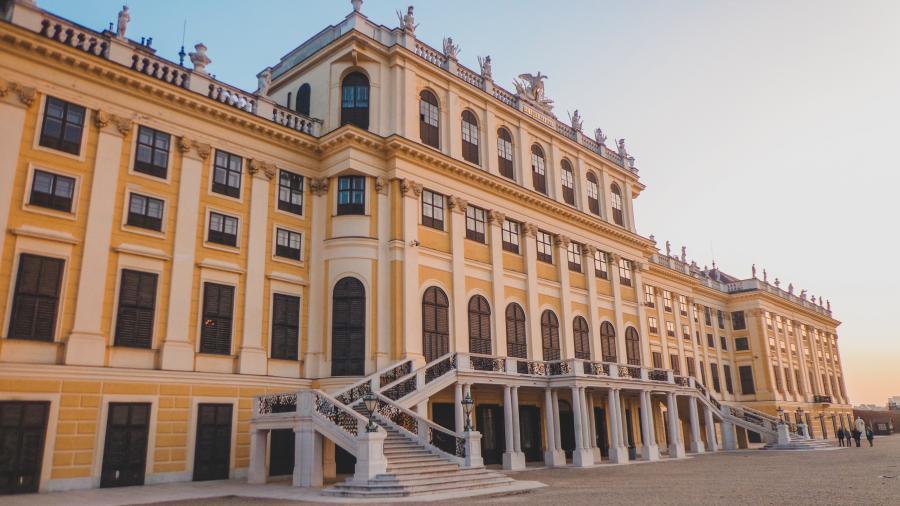 After two years of cancelled trips due to the pandemic, the long-delayed Westmont Orchestra tour takes place May 8–17. The musicians travel to Salzburg, Vienna and Prague for Michael Shasberger’s last performances as the orchestra’s conductor. “I’m particularly delighted to perform in new settings, including the theatre at the Schönbrunn Palace in Vienna and Dvorak Hall in Prague. Playing in these places is truly walking in the footprints of the masters, and it’s a great honor to do so,” Shasberger says.

The College Choir, conducted by Daniel Gee, embarks on its own tour this year, traveling up the West Coast to perform in Portland, Seattle and Napa Valley May 8–16. Both choral groups present a significant amount of music in Spanish, with composers ranging from Carlos Guastavino to Eric Whitacre to Gee, who contributes a composition written in honor of Grey Brothers’ retirement this May. “Spanish language choral music is less often performed than music in English, Latin, German or Italian, so it’s a privilege to share more of this music with our audiences,” Gee says.

After a canceled international tour and many COVID restrictions, Gee and the Westmont singers look forward to performing for so many live audiences again. Gee will lead his first tour as director and enjoys working with his students. “Together, we seek to glorify God and create something meaningful and beautiful,” he says. “Each student has a unique story to share and a life that’s unfolding. I’ve always told students that their music is powerful because their story is singing. The meaning of a particular song is refracted through each person’s background, perspective, personality, gifts and God’s grace in their life. It’s glorious to behold and a privilege to make music with them.” 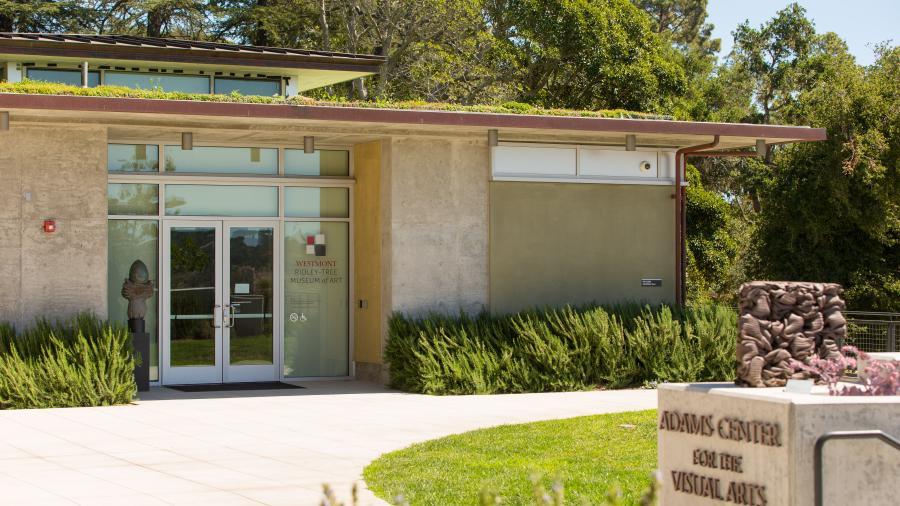 The graduating seniors who majored in art presented their original works in a special exhibition in the Westmont Ridley-Tree Museum of Art April 7 through May 7. The museum opened after the Commencement ceremony on May 7 so friends and family members who attended could see the exhibition.

As usual, the final show of the season invites submissions from artists in Ventura, Santa Barbara and San Luis Obispo counties reflecting the theme UNCANNY. Westmont alumnus Robin Eley ’01 will serve as the juror for the exhibition. An award-winning artist born in Australia, he now lives in Los Angeles and is known for his hyperrealist style. The show will run from May 19 through June 18 at the museum.