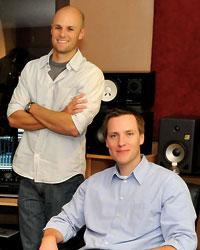 As members of the Nashville-based band Someday Company, Brian Peterson ’00 (seated) and Mike Taylor ’00 found selling music through iTunes frustrating. Not only did they earn only 50 cents of the 99-cent fee, but they had to wait months for their songs to appear on the site. Wasn’t there a better way for independent artists to sell their music online?

To resolve this frustration, Brian and Mike and two partners created Bandbox (www.bandbox.com) in 2007. Its Internet-based technology allows musicians to sell music directly to fans through Web sites, Facebook pages and blogs. Bandbox launched in 2008, and more than 4,000 artists (including Taylor Swift, Keith Urban and Jewel) now use the innovative tool. Each musician decides how much to charge and receives all the proceeds from sales.

“Our goal is to do something valuable for artists and help them make a living,” Mike says.

From the beginning, Bandbox has been committed to passing all the profits from music sales to artists. To date, most of the company’s revenue has come from advertising. In May, Bandbox will shift its business model, and artists will pay a small monthly fee and continue to keep all they receive from selling their music.

“An entrepreneurial venture is a very tough road,” Brian says. “You have to have thick skin because you get beat up a lot. It’s not for everyone.”

“We’ve learned that starting a business involves your wife, too,” Mike adds. “They share the risk, and they have to be on board with you.” The two spouses are Westmont alumnae: Sally Faubion Peterson ’00 and Keely Baker Taylor ’00. Each couple has two small children.

Mike and Brian, who have been good friends since sixth grade, didn’t move to Nashville to become entrepreneurs. They went there to play in a band. At Westmont they performed as the Blooming Onions, and they started Someday Company in Nashville with three other musicians to showcase their singing, guitar playing and song-writing.

Meanwhile, they held full-time jobs in the music industry. “The band never became a good way to support our families,” Mike says. In 2001, Brian went to work for EMI and Sony Music overseeing digital, mobile and Internet marketing. Mike directed East Coast operations for various contract-service companies before consulting for the digital music research organization, Music Ally. They quit these positions in 2008 to work on Bandbox full time.

Brian majored in economics and business at Westmont. “My whole family is entrepreneurial,” he says. “Many of my relatives own small businesses, and I grew up in that environment. Bandbox mixes music and business, the two passions of my life.” All his siblings graduated from Westmont: Mike ’97, Tracy Hughes ’01 and Becky ’05.

Mike chose to study philosophy. “I really appreciate the quality of the education we received and the close-knit community we experienced at Westmont,” he says. “Community has become very important to me.”

One day Brian and Mike hope to sell Bandbox and start over. “We have many ideas,” Brian says. “Right now we’re focused on securing capital and growing Bandbox.” The Taylors and Petersons intend to continue their joint ventures. “We want to do life together,” Brian says. “We will trust God to lead us — He has done amazing things in our lives.”