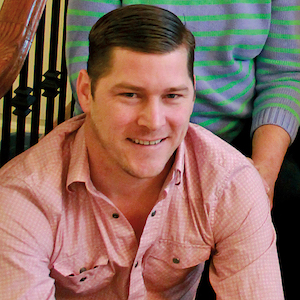 Jason Friesen ’02 flew through Miami in the wake of Hurricane Katrina. “I saw destruction everywhere,” he says. Viewing more devastation on CNN, he felt compelled to get out of a cubicle and get into the field.

Growing up in a bookish family in Connecticut, Jason majored in English because he loved to read. “In college I started figuring things out on my own, which was challenging and made me reconsider a lot,” he says. Studying in Germany during fall 2001 and watching the news about 9/11 from Europe changed his perspective on the world. Unable to find work in Germany after he graduated, he moved to Costa Rica and taught English to locals and Spanish to foreigners. He also volunteered for Habitat for Humanity translating manuals from Spanish; he was traveling for Habitat during Katrina.

Jason soon returned home for training in emergency medical services (EMS), working toward an EMT-paramedic license. To get close to Latin America, he moved to San Diego, became a paramedic, volunteered with the Red Cross in Tijuana and worked as a flight medic. “I quickly realized they didn’t need paramedics—they had bigger problems,” he says. Flying all over Mexico, he made connections and sought donations for medical equipment. Unable to find an organization addressing the EMS issues he faced, he started Trek Medics International to improve emergency medical care in developing countries.

In August 2009, Jenise Steverding ’97 contacted Jason. She worked for Giving Children Hope in Southern California and wanted to learn more about Trek Medics. When a massive earthquake shook Haiti five months later, she invited him to join a team flying to Port Au Prince. Once again, a disaster changed the direction of his life.

“Haiti has no ambulance service, so people do whatever they can to get the sick and injured to a hospital,” he says. When Jason transported a seriously ill infant in search of an emergency room, the trip took three hours and several vehicles; the baby barely survived.

Jason thought Trek Medics could help provide ambulance services, and he returned to school to earn a master’s in public health at Columbia while working full time for Project Hope in Haiti. He now lives in New York City and focuses only on Trek Medics.

Working with one employee in Haiti and volunteers (including Dave Morley ’02 who helps with grantwriting), Jason led the creation of Beacon, software developed by Vision Point System. Using the rudimentary system in place—find anyone you can to take you to the hospital—Beacon sends text messages about emergencies to volunteers with vehicles who’ve signed up to provide transport.

The system operates in Acquin, and Jason seeks to expand it, working with local partners such as Digicel, which provides wireless phone services in Haiti and 30 other nations. But it takes time. “High-profile diseases attract funding, but car wrecks also devastate communities, and the victims get little help,” he says. “The Good Samaritan provided the first paramedic response with a donkey, some cloth and oils. Not a lot has changed since then, and we want to recruit many Good Samaritans to transport the sick and injured.”