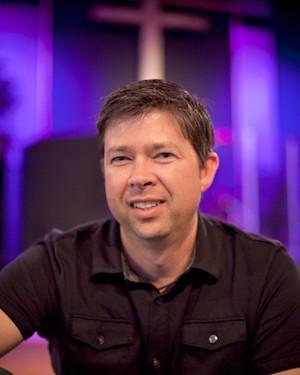 Russ Graeff ’91 made his first cultural transition when he moved from Austin,Texas, to Santa Cruz, Calif., the summer before high school.“That first semester was challenging,” he says.Ten years ago, in a “moment of obedience,” he made an even bigger move, from a corporate career to the church.

Russ always envisioned working in business even though he majored in English. “I have an entrepreneurial mind,” he says. Just before he started college, a family friend said he’d trade all the business majors he’d hired for people who could communicate and write well. “I preferred writing papers to taking multiple-choice tests and decided to bring good writing skills and clarity of thought to the business world,” Russ says.

Despite a rough freshman year, when he ended up on academic probation and got caught counterfeiting a parking pass, Russ learned how to study and made tremendous friendships.“Westmont equipped me for the corporate world—and, as it turns out, for ministry,” he says.“My four years there were some of the most amazing of my life.”

At 21, Russ began a career at Intel, starting out in sales and marketing. He moved into divisional planning, then developed strategies for factories throughout the world, and finally managed an entire sales team. “I found the environment invigorating, fast-paced and challenging,” he says. “I thrived.”

But when his 54-year-old father died from colon cancer, Russ began to rethink his priorities. “I was such a reluctant leader growing up,” he says. “My father kept putting me in places where I would have to lead: sports, Boy Scouts, church. He invested in me. After his death, I asked myself if I was doing what God had called me to do. My wife, Cindy, and I helped found Bridgeway Christian Church in 1996, and I saw ways to use my skills and gifts there. But traveling a lot and working 50-60 hours a week left no time for that. Reordering my values brought clarity that God was calling me into the ministry. I made the harrowing decision to step away from a firm paycheck to a ministry salary, a tricky financial transition. But God blessed us.” Cindy had left her career at Intel the year before to care for their daughter, and she’s continued to stay at home.

As executive pastor of Bridgeway in Rocklin, Calif., Russ combines church administration with investing in people, managing 28 “creative and invigorating” staff members as well as the church’s finances.“I get a front-row seat on what God is doing in the church and in people’s lives,” he says. In his 10 years at Bridgeway, the congregation has grown from 450 to 4,500.

Russ helps organize the church’s justice-oriented ministry, which cares for children in Haiti, Uganda, Indonesia and Malawi.When he preaches, he often focuses on the scriptural foundation for this work, citing passages such as Micah 6:8,“What does the Lord require of you but to do justice, to love kindness and to walk humbly with your God?” Six years ago, Bridgeway started a school in Uganda that now educates 550 students.“There’s a strong educational piece to addressing poverty,” he says.“The school helps the entire village.”