Westmont Magazine A Storyteller Finds Her Voice and Her Faith 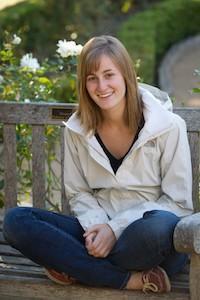 English professor Paul Willis led Jamie Wells ’12 and his Creative Writing class on a hike along the creek-side trail that meanders through campus. “By the end of the 30-minute walk, I had the entire idea for a story laid out in my mind,” she says. “Low Swing and Sweet Cherries” was the first fictional story she’d ever written (read it beginning on page 14 of this issue), and it won the 2011 Conference on Christianity and Literature Student Writing Contest for fiction.

“It was one of the finest stories I have read,” said Linda McCullough Moore, a judge for the fiction contest and author of a novel, “The Distance Between,” and more than 300 shorter, published works. “The narrator, a young boy, and his little sister are people I want to know, to spend time with, be charmed by, and to learn from. The writing is accomplished, the characters and story elegantly developed, but even more remarkable, the writer explores the foundations of the very nature of creative work. As each of the siblings relates to the practice of storytelling, fact and fiction, recording and invention, we come to understand more fully the motivation and sensibility of a writer.”

A native of San Jose, Calif., Jamie was raised by a Christian father and a Jewish mother. “I grew up in both worlds, but I wanted to go to a Christian school,” she says. “My parents supported my decision to attend Westmont; it was a group decision.”

Although she was involved with a church in San Jose, Jamie hoped a Westmont education would strengthen her faith. “I hadn’t had an intellectual discussion about Christianity and wanted Westmont to answer my questions,” she says. “Living in a Christian community, I found answers through incredible relationships and people investing in and supporting me in significant ways. It wasn’t until my first year at Westmont that God transformed and significantly impacted me. I encountered Christian community in ways I hadn’t before.”

Jamie competed on the cross country team her first two years at Westmont. Although she never recorded outstanding times, she made lasting relationships with her teammates and Head Coach Russell Smelley. “He came alongside me my freshman year and saw my insecurities and what I needed to work on in my relationships,” she says. “His mentoring and advice, which went way beyond running, made an incredible impact on me.” Jamie left the cross country team after her sophomore season, but she continues to hold weekly Bible studies with 10 women who were first-year students on the team with her. “The group has persevered,” she says. “All of them have contributed monumentally to my spiritual growth and learning.”

Instead of competing, Jamie chose to become a resident assistant for first-year students in Clark Halls her junior year. “I was starting to navigate some of my gifts, realizing I enjoy listening and coming alongside people,” she says. “I wanted to do that in a structured way. God’s way of redeeming my life story specifically applied to the freshman experience in a way I thought would be helpful to others.”

As a writer, Jamie has captured the attention of several faculty members. Paul Delaney, professor of English, approached Jamie her first year at Westmont, encouraging her to pursue writing. “He called me to a higher standard and encouraged me more than any teacher I’d had before,” she says. Similarly, Willis suggested she continue to pursue fiction. “He has been the voice of wisdom, truth and guidance, answering my questions about what it means to be a writer,” she says.“

Jamie is one of the most talented short-story writers — perhaps the most talented short-story writer — that I have been privileged to work with in my 24 years at Westmont,” Willis says. “Her sentences sing with metaphor and insight, and her characters collide in ways that make you believe in their destinies. I hope to be reading her work for years to come.”

Jamie, an English and communication studies double major, also praises Omedi Ochieng, associate professor of communication studies, and Sarah Skripsky, assistant professor of English, who hired her to work in Writers’ Corner, tutoring fellow students in the library. “It’s been an invigorating experience, contributing to someone else’s development,” she says. “I’ve always put a high value on communication, and teaching someone to communicate more effectively has been rewarding.”

Jamie is considering a career as a professor, and she has started the process of applying to divinity school. “I enjoy having difficult conversations and wrestling with questions,” she says. “I love theology as well, which is why I’m considering divinity school. I’m still processing what it means to be a writer and a Christian and how I can best use my gifts to glorify God.”