Westmont Magazine Studying the State of the British Church

Professor Alister Chapman explores a possible link between the dissolution of the British Empire and a drop in British church attendance. 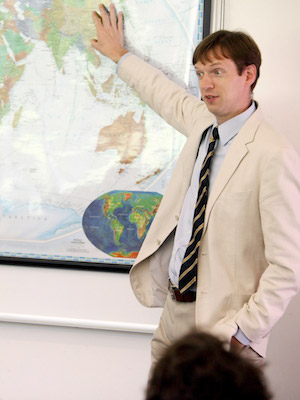 While studying John Stott, Alister Chapman has reflected on possible connections between two phenomena: sagging church attendance in Great Britain after World War II and the country’s eclipse by new superpowers. “I think there’s a link between imperial decline and church decline,” he says. “It’s an intellectual question that also has contemporary significance. If Britain’s churches gave up when Britain lost its sense as a special nation, could this occur in America in the future?”

Born in Britain, Alister earned three degrees at the University of Cambridge, including a doctorate in history. He studies the history of Christianity in modern Britain, and his doctoral work focused on Stott, the most significant British evangelical in the 20th century.

Alister’s book, “Godly Ambition: John Stott and the Evangelical Movement” (Oxford University Press, 2012), chronicles Stott’s career as an evangelist at a time when British Christianity declined. As he struggled to see the fruit he desired, Stott spent much of his later life speaking overseas.

“Stott was thoroughly evangelical and thoroughly educated, and unapologetic about both of these things,” Alister says. “Increasingly he saw his calling outside of England. Wherever he went, people were drawn to his clear, intelligent expositions of Scripture. From an English perspective, there is something slightly sad about the fact that our most prominent evangelical leader of the past 100 years received most obvious recognition for his work outside England, despite the fact that he worked so hard to impact English society for Christ.”

Choosing Stott as a topic allowed Alister to develop his own theological reflections and pursue an interest in intellectual history, or the history of ideas. “Stott’s work encouraged me when I was a student, and I was looking for someone to study,” he says. “I wanted to look at the development of an individual’s thought in historical context.”

In addition to completing the book, Alister has written and spoken about Stott. He contributed an op-ed piece for the Huffington Post, “John Stott’s Lasting Impact on American Evangelicalism,” on the day of Stott’s U.S. memorial service, Nov. 11, 2011.

To better understand the struggles of English churches as they sought to reach people after World War II, Alister has immersed himself in the archives of newspapers, the BBC and Parliamentary debates. He’s exploring the changing ways in which the British spoke about their country and the extent to which it was Christian. He has presented papers on this topic, including “Where There Is No Vision, the People Leave: The End of Empire and the Decline of Christian Britain, 1945-1970” at the Huntington Library. His research now focuses on Derby to discover if the national trend applies at the local level.

After Alister finished his undergraduate degree at Cambridge, he served in Minsk, Belarus, with the International Fellowship of Evangelical Students. He then spent more than three years running a student ministry with his wife, Margaret, at a church in Milwaukee, Wis., before returning to Cambridge to complete his doctorate. “Teaching at a place like Westmont allows me to combine my academic and pastoral interests,” he says. “I see nurturing students as an important part of the vision for faculty. I’m committed to developing relationships with them outside of class, talking with them about their future hopes and lives.”

In his upper-division course on British history since 1945, Alister addresses many of the questions he raises in his research. Several British newspapers are now fully digitized online, making it possible for his students to have an intensive research experience in modern British history. “I want students to see me work and wrestle with research questions to give them an idea of what advanced historical work looks like,” Alister says. One of his students has been conducting research with him on his new project on Derby.

Questions about the relationship between the history of religion and intellectual history led Alister to organize a conference in 2004 and co-edit a scholarly book, “Seeing Things Their Way: Intellectual History and the Return of Religion” (University of Notre Dame Press, 2009).

“The book was designed for historians to help them see how pulling together these two areas is a fruitful way of studying the past,” Alister says. “Secular scholars may not pay enough attention to the role of religion in the work of major thinkers and philosophers, and people working in the history of religion may not pay enough attention to the historical circumstances of the people they are studying.”

Alister’s work reflects his desire to contribute broadly, to the academic community, to the church and to students’ lives.