Westmont Magazine Telescopes Put a Focus on the Sciences 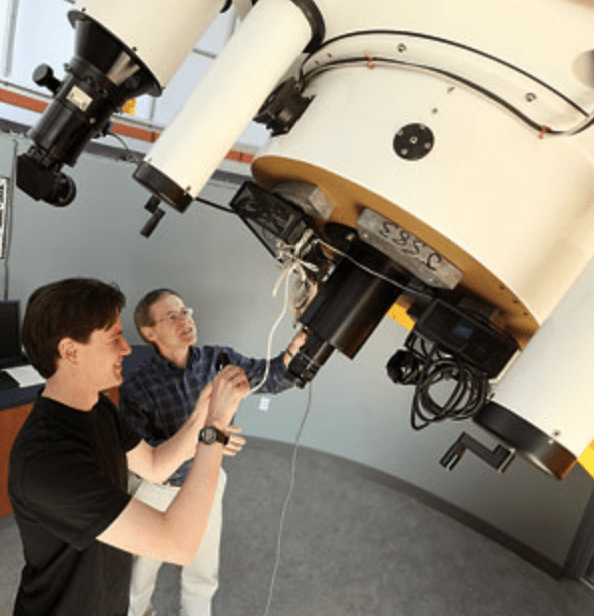 For more than 50 years, Westmont has provided a window into the heavens through its exceptional telescopes and astronomy program. The powerful Keck Telescope has replaced older instruments, and the campus boasts a beautiful new observatory. Today, Westmont is better equipped than ever to conduct astronomical research and to invite students and local residents to view the night sky through the lens of a telescope.

Professor Emeritus Paul Wilt has written about the origins of Westmont’s observatory. Peter Stoner, a visionary professor, helped build the first facility and acquire its telescopes. After teaching for more than 40 years at Pasadena High School and Pasadena City College, Stoner came out of retirement to provide critical leadership in the sciences at Westmont and chaired the division of natural sciences from 1953-57. Recognizing the great need for well-trained scientists and engineers in the midst of the Cold War, he developed a 3-2 pre-engineering program. Stoner was deeply committed to the integral relationship between science and faith. When the Citadel staff dedicated the 1957 yearbook to Stoner, they noted his “high standards of character and academic excellence” and his “inspiring vision of the Westmont of tomorrow.”

Carroll also knew Ruth Kerr, Westmont’s principal founder, because they attended the same church. In a 1954 letter, Mrs. Kerr told Westmont President Roger Voskuyl that Carroll spoke to her at a church social and offered to build a large telescope for Westmont if the college would construct a building for it. Westmont accepted this gift, and Carroll completed two telescopes. The observatory built to house the instruments was named for Carroll and included a classroom and laboratory, a dark room, an office, storage space, restrooms, and two domes for the telescopes. The building was dedicated in June 1957, and the college presented a key to Carroll.

The 16-inch reflecting telescope was equipped for photographic, spectographical and micrometer work. The six-inch refracting telescope had a synchronous electric clock drive and could be taken outdoors and mounted on a tripod.

In 1963, Carroll constructed a better-known telescope for the Stony Ridge Observatory in California’s San Gabriel Mountains using Westmont’s as a prototype. Lockheed used this instrument to survey the moon for Apollo landing sites.

Westmont installed the 24-inch reflector Keck Telescope, an F/8 Cassegrain instrument with Ritchey-Chretien optics, in 2007. The instrument gathers twice the amount of light with nearly twice the resolving power of Carroll’s telescope. It has captured spectacular images of the universe, such as supernova SN2008an and the volatile comet 17P/Holmes. The new observatory has a control center for the instruments and a place to view images. Carroll and Stoner would both feel right at home there.