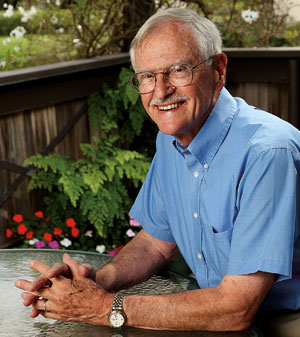 The late David Cole said a central theme of his life was watching things grow. A biochemist for 36 years at UC Berkeley, he observed biology develop from a collection of unrelated fields to a unified, systematic discipline attracting an increasing number of majors. His wife Thelma, who died in 2008, their three children, eight grandchildren and seven great-grandchildren, brought him much joy over the years. A Westmont trustee from 1994-2006, he witnessed the remarkable growth that occurs in students while they're enrolled at the college.

Serving on the board at Westmont was one of the high points of my life," David said. "I appreciated the relationships trustees develop with each other and their keen focus on the liberal arts aspect of the college. The time of worship and sharing that begins each trustee meeting was deeply meaningful to me.”

David believed wholeheartedly in the mission of Westmont. "At a small, liberal arts college students can be immersed in their education and enjoy close interaction with professors," he said. "That is such a valuable experience, especially for students who struggle with their faith in an intellectual way. Westmont sends out graduates with a thorough, intellectual grasp of their faith, who are well equipped to present it wherever they go.

Multiple generations of David's family attended UC Berkeley. His grandmother earned a degree in French there (she really wanted to study mathematics), David graduated with a major in biochemistry and his wife, Thelma, studied English literature and American history. Their son also went to Berkeley. David lived there most of his life and only moved to Santa Barbara in 1996 to be close to Westmont. As much as he admired the university, he believed Westmont offers a kind of Christian higher education community impossible to achieve in larger institutions.

David and Thelma established an estate provision in their will and a charitable remainder trust benefitting Westmont, thus becoming Wallace Emerson Society members. "I'm grateful God allowed me to be involved with Westmont," he says. "It's been a stimulating experience and one of God's rich rewards."

Reproduced with permission from the summer 2009 issue of the Westmont College Magazine.

For more information about the tax-advantaged benefits of charitable remainder trusts, please contact the Office of Gift Planning at (805) 565-6058 or giftplanning@westmont.edu.