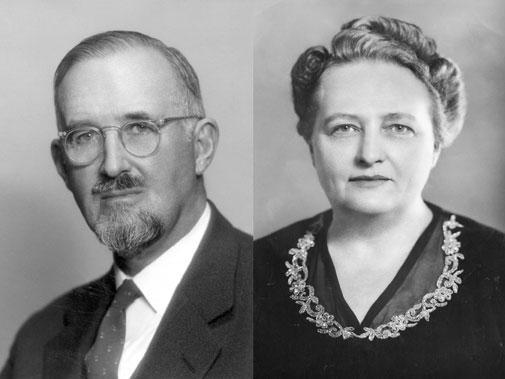 Since Westmont’s founding 75 years ago, the five planks of its educational program—liberal arts, Christian, undergraduate, residential and global—have characterized the college and shaped its history. A commitment to the liberal arts developed in the early years.

When Ruth Kerr joined in founding the Bible Missionary Institute in 1937, she wanted to help equip students for missionary service. But she began hearing that missions organizations needed students with a more complete training than the typical Bible college offered. She then endorsed a proposal to add a junior college program to the Bible curriculum and create Western Bible College.“This will be virtually a junior Wheaton College,” Kerr announced Jan. 3, 1939. Students could pursue liberal arts and Bible school programs at the same time.

A year later, the school reorganized as Westmont,“a liberal arts college with a strong Bible department.” Wallace Emerson, dean of students and professor of education and psychology at Wheaton, agreed to become the new president on two conditions: he alone would appoint and dismiss faculty; and the curriculum would be entirely liberal arts.“The most good that could be done to the young people of our clientele was the liberal arts concept with plenty of Bible, plenty of supporting material to the Bible and then very good basic work in math and science and languages,” he said.“These young people are going to have to go out and fight the devil on a number of fronts, all of which requires an intelligent understanding of their own position.” He quoted the late R.A.Torrey,“He who understands only the Bible does not understand the Bible.”

Over the decades, Westmont continued to define itself as a liberal arts college and developed its curriculum accordingly. Students majored in one discipline and took classes in many to develop both depth of study and breadth of understanding.They acquired the flexible skills needed to succeed at work and in life, such as critical thinking, character development and communication. But Westmont’s ongoing allegiance to the liberal arts became more distinctive when institutions began abandoning the tradition. President Stan D. Gaede, a Westmont graduate and product of a liberal arts education, regretted this decline and realized that even people at liberal arts colleges didn’t fully understand their meaning. In 2002, he helped establish the Institute for the Liberal Arts at Westmont to explore and promote this approach to education. The board renamed it the Gaede Institute for the Liberal Arts when he left the presidency in 2006.

“This wonderful tradition is in danger of losing all substance and meaning,” Gaede said. He thought Westmont could make a powerful contribution because a liberal arts education should provide a unified outlook that recognizes the interconnectedness of knowledge. Offering such a holistic view of education is difficult for institutions with no clear sense of the value and purpose of life. But Westmont is firmly grounded in a Christian worldview and understands how education contributes to a complete and meaningful life.“We think a Christian liberal arts education provides the very best foundation for life,” Gaede said.

The Gaede Institute draws people from all over the nation, both scholars and lay people, for its annual Conversation on the Liberal Arts, where both Christians and non-Christians discuss values and issues openly. “The institute has placed the big questions back where they belong: front and center,” Gaede said. It publishes a journal each year of these proceedings.

The Gaede Institute also sponsors programs to educate high school students about the liberal arts: Liberal Arts Ambassadors and Summer Scholars. With the growing complexity of real-world problems, the world needs people schooled in the liberal arts, who recognize that their education is connected to the whole of their lives—their community involvement, their political engagement, their spiritual development and their profession—and bring a range of perspectives to social issues. For 75 years, Westmont has been graduating students with this essential capability.