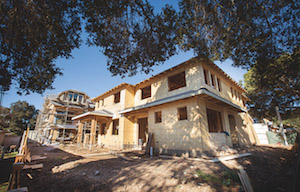 More than 20 years after Westmont built 41 homes for professors and their families next to campus, the college is constructing 13 condominiums to increase the amount and type of housing available for faculty. Located near Cottage Hospital in Santa Barbara, the homes will be ready for new owners to move in this August.

The city originally approved the project in 2009, but the challenges of the Tea Fire and the recession delayed it.

“After a decade of planning and preparing and weathering a significant economic downturn and destruction from the wildfire, the college finally began construction,” says Doug Jones, vice president for finance. “As a premier liberal arts college, Westmont seeks to attract quality educators from around the world. The availability of affordable homes near campus has been an important draw for those considering a move to Santa Barbara. With these 13 units downtown, we’re diversifying our housing portfolio.”

The college hopes to integrate the condos with the faculty homes in Las Barrancas so professors can move into larger residences if their families grow or so empty-nesters can downsize.

All the units will be sold at below market prices determined by the college. Two of the three-bedroom units will be set aside as middle-income affordable in compliance with the city’s inclusionary housing ordinance. Those who purchase one of these condos from the college must sell it back to Westmont if they move or leave.