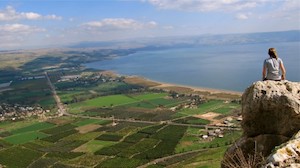 They use public transportation whenever possible. Walking tours and short hikes—with map and compass—help them explore the storied land. A multi-day hike in the Galilee, kayaking in the Mediterranean and rafting on the Jordan River create active outdoor learning experiences. Students enrolled in Westmont in Jerusalem have set off on an adventure, enjoying cultural and geographical immersion in the Middle East and focusing on the 21st century as well as the first.

The program also involves more traditional activities such as classroom lectures and field trips to historic sites. Students travel throughout Israel and the West Bank (Palestine) and visit Jordan and Egypt. They explore the culture, traditions and history of the Middle East from a base in the ancient and conflicted city of Jerusalem. Service-learning opportunities with local agencies and conversations in the marketplace provide a deeper connection to the people.

A veteran of overseas pro-grams, religious studies professor Bruce Fisk has led many trips to the region. He introduces students to the Jesus in the Gospels and the world of first-century Roman Judea. Author of “A Hitchhiker’s Guide to Jesus: Reading the Gospels on the Ground,” he considers the land a fifth gospel that sheds valuable light on the other four. He’s also well rooted in the present. “Western Christians won’t understand the modern Middle East until they meet Israelis and Palestinians, Jews and Arabs, for themselves, listen to their stories and share their lives,” he says.

Psychology professor Tom Fikes co-led a Middle East Mayterm program with Fisk in 2009, so the two are well suited to direct the inaugural program. Since 1999, Fikes has directed and taught in the Inoculum program, a two-week trip in the Sierra back country, and he brings his love for adventure to the semester. Trained in cognitive psychology and neuroscience, Fikes explores the complex relationships and contexts that existed in the time of Jesus and in the midst of the Israel-Palestine conflict.