A rising full moon will greet visitors to the Westmont Observatory at the free, monthly public viewing of the stars on Friday, April 15, beginning at 7 p.m. and lasting several hours. Face coverings will be required at the event. 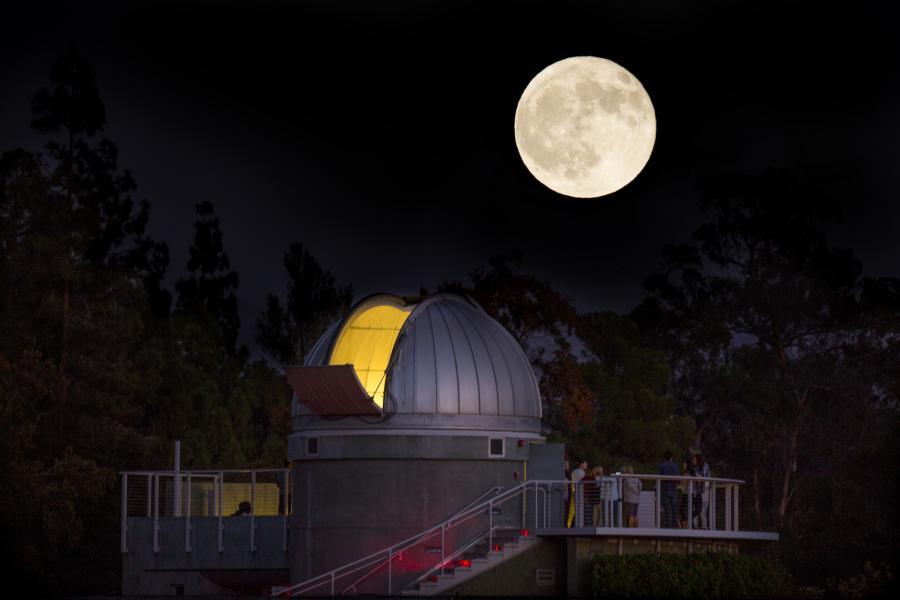 “This should be special for folks who would like to view the moonrise from the observatory deck,” says Thomas Whittemore, emeritus instructor of physics and Santa Barbara Astronomical Unit (SBAU) member.

The heavens will also feature a naked-eye triangle in the sky, high in the southwest. “The Winter Triangle consists of the stars Betelgeuse, Procyon and Sirius,” Whittemore says.

Because of the rising, bright moon, Whittemore says he will aim Westmont's 8-inch refractor telescope toward some interesting open clusters, including Collinder 69, which is situated at the head of Orion, the hunter. “Centered on the star Meissa, Collinder 69 is a collection of about 20 stars with a large range in brightness,” he says. “Collinder 69 lies in our region of the Milky Way, but at a distance of about 1,600 light-years from us.”

Other open clusters include Messiers 36, 37 and 38 - all in Auriga, the charioteer. “We’ll also look at Messier 35, located at the foot of one of the twins (Gemini),” he says. “M35 lies about 2,800 light-years from us and consists of reasonably young stars, 110 million years old. These are extremely bright stars to be visible at such a distance. You would need a very large telescope to view our sun at such a distance.”

Westmont hosts a free, public viewing on the third Friday of every month. Along with the college’s powerful Keck Telescope, members of the Santa Barbara Astronomical Unit bring their telescopes to share with the public. Free parking is available near the Westmont Observatory, which is between the baseball field and the track and field/soccer complex.