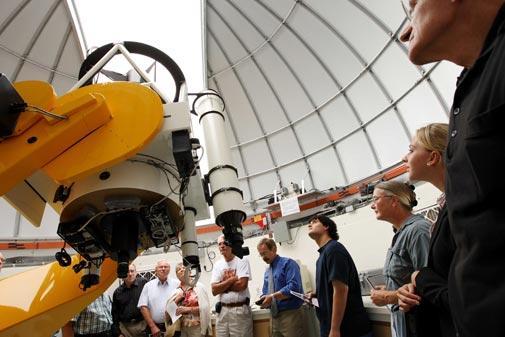 The Westmont Observatory reopened to the public on March 18, 2022.  Due to the pandemic, this was the first time in two years that it has been open to the public.  Face coverings will still be required at all public viewings until further notice.

Westmont hosts a free, public viewing on the third Friday of every month at 7 p.m. lasting several hours. Along with the college’s powerful Keck Telescope, members of the Santa Barbara Astronomical Unit bring their telescopes to share with the public. Free parking is available near the Westmont Observatory, which is between the baseball field and the track and field/soccer complex.

In case of inclement weather, please call the Telescope Viewing Hotline at (805) 565-6272 and check the observatory website to see if the viewing has been canceled. 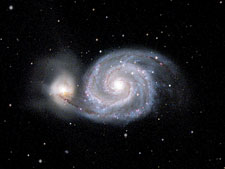 A Powerful Instrument for Astronomical Observations at Westmont

The Keck Telescope, a computer-controlled 24-inch F/8 Cassegrain reflector with Ritchey-Chretien optics (the same configuration used on the Hubble Space Telescope), has served as a versatile instrument for Westmont faculty and students for over a decade and remains one of the most  powerful telescopes on the California Central Coast. Not only has the device been used for a variety of research projects and coursework, but it has also been a source of awe and inspiration for the greater Santa Barbara community.

Prior to the arrival of the Keck Telescope in 2007, the college had been using a 16-inch telescope with about half the light-gathering power of the current instrument. The upgrade was funded through the generous support of the W. M. Keck Foundation, the James L. Stamps Foundation, and private donations, with DFM Engineering in Colorado providing the construction and fine-tuning of the telescope. In 2010, the telescope was relocated to a new observatory adjacent to Carr Field. The modernized observatory includes bountiful computing resources and laboratory space below the telescope platform.

The Westmont Observatory also serves as one of the observing sites for the Santa Barbara Astronomical Unit (SBAU). Before the pandemic, the SBAU held public viewings at the observatory every third Friday of the month. In particular, the Keck Telescope has provided clearer and more dramatic demonstrations of the splendor of God’s creation to members of the broader Santa Barbara community, including young children and students in local schools.

“The observatory remains a signature component of the Westmont campus and a favorite among our current students and returning alumni,” says Professor Bob Haring-Kaye from the Department of Physics and Engineering. “We are excited to see how this facility will continue to be used to provide outstanding educational experiences, including meaningful research experiences, to our students and point to the artistic grandeur of the Creator.”

The original Westmont College Observatory was dedicated on June 1, 1957. (It has since been replaced by a new observatory in 2010.) The main dome featured a 16.5-inch reflector which was made and donated by George Carroll. The scope was equipped for spectroscopic and micrometric work, whose introduction originally made national news.

More recently, the original telescope caught the limelight as a group of amateur astronomers from the Santa Barbara Astronomy group observed the rotation of Mars with a CCD camera (Astronomy Magazine, Feb. 1989, p. 92.) These were some of the very first CCD images of Mars taken by amateurs.