“The ranking affirms Westmont’s rigorous liberal arts curriculum that pro-vides a well-rounded education,” says President Gayle D. Beebe. “Westmont seeks to awaken students to their intellec-tual capacities, transforming them into leaders with the character and commit-ment to change the world for the better.” 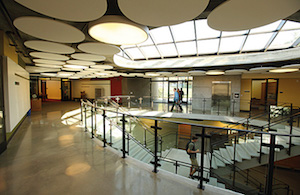 Westmont is one of only two liberal arts colleges in the Council for Christian Colleges and Universities (CCCU) in the top 100 and the only one in California. Westmont moved into the third tier in 2000, into the second in 2003 and into the top tier in 2005.

Now in its 30th year, the U.S. News ranking seeks to find the best academic value for the money. Three categories contribute to 65 percent of the score: graduation and retention rates, assessment of excellence and faculty resources.

The salaries of Westmont graduates fared well in two 2014 rankings based on data collected from the website PayScale. The Washington Post listed Westmont as No. 15 in the nation for colleges and universities with the greatest salary growth between average starting and average mid-career salaries. A Forbes magazine story identified Westmont as No. 23 among the national liberal arts colleges whose graduates earn the highest salaries.