The Westmont Ridley-Tree Museum of Art exhibited recent acquisitions during the summer, including a painting by Benvenuto Tisi and works by Pierre-Auguste Renoir, Pablo Picasso and Mary Cassatt. The work by Tisi, also known as Il Garofalo, is a promised gift to Westmont by Michael Huffington in honor of Lady Leslie Ridley-Tree, valued at about a half-million dollars.

Tisi was an Italian Mannerist painter of the School of Ferrara. He studied in Rome with Raphael and was a contem-porary of Titian. Known for his paintings of religious subjects and mythological themes, Tisi worked through the 1550s. 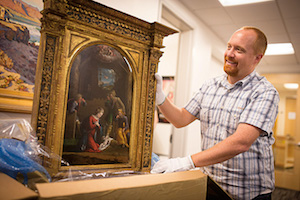 The work, “La Nativité” from the mid-16th century, depicts Christ’s birth, long an important subject of Christian art. “Garofalo’s painting is typical of an iconography that first appeared in Europe during the late 14th century,” says Judy L. Larson, Askew professor of art history and director of the museum. “In this style of representation, the Virgin Mary is not depicted as recovering from childbirth; rather, she kneels before the Christ Child in adoration, who is not placed in a manger, but reclines contentedly on a pile of straw. The inclusion of angels is another iconographic development originating in the Renaissance.”